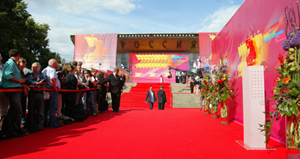 The venue: Rossiya Theatre in the center of Moscow

This year's festival focused on Central and Eastern Europe; organizers argued that the potential of movies from former Socialist bloc countries is often underestimated at top venues.

When we look at the films in this year's competition, we are pressed to find any high-profile directors; in fact, this was already an issue in the past. Such celebrities as Emir Kusturica, Peter Greenaway and Takeshi Kitano came to Moscow this year, but not with their new films.

Currently, the MIFF is not the first venue major directors consider for their debuts. In order to improve the festival's standing, some critics have suggested that the MIFF embrace commercial cinema as opposed to more independent productions.

There are some indications that the Moscow festival may, indeed, turn its face toward Hollywood. For example, the opening movie of this year's festival was "Hancock" by Peter Berg, starring Will Smith and Charlize Theron, which had its world premiere in the Russian capital two weeks before its U.S. release. Local enthusiasts were jubilant that a major Hollywood film agreed to premier its movie in Moscow for the first time, despite fears that such a premature showing would fall prey to unlawful distribution in a country where DVD piracy is a big issue. Yet "Hancock" was not unique in its debut at a foreign venue; many remember that The Da Vinci Code premiered at Cannes two years ago.

While Russian mainstream cinema is still recovering - albeit, very rapidly - from its post-Soviet slump, it is unlikely that the MIFF will move toward commercial films.

However, many believe that festivals are supposed to promote films to audiences, not just serve as venues for filmmakers and critics to exchange ideas. This is a challenge because ordinary moviegoers are often lukewarm to non-mainstream films. Consequently, distributors are reluctant to purchase independent films.

This year's Moscow festival presented an interesting approach: in conjunction with the National Academy of Film Arts and Sciences, the festival offered a special grant. It was given to the distributor who purchased the rights to the winning film. Some experts interpreted the move as recognition of the limited quality of the festival's official selection. As one critic mentioned, "What kind of films are competing for the main prize if distributors need incentives to get interested in the winner?"

However, one aspect the festival's organizers are particularly proud of is its unofficial program selection. This is where the MIFF gains its identity and uniqueness: viewers are given an alternative to mainstream films. After all, what is status if you don't have an opportunity to watch quality films?