Last autumn, Rossiya TV, Mayak radio and the newspaper Izvestia announced a contest to determine the "Seven Wonders of Russia." In the first stage, more than 25 million votes were cast online to make a shortlist of 49 tourist attractions. Finalists were announced during a concert in Moscow on June 12, Russia Day.

The winners were: Geyser Valley on the Kamchatka Peninsula, Lake Baikal in Eastern Siberia, Peterhof outside St. Petersburg, the Rock Pillars in the Komi Republic (northeastern part of European Russia), St. Basil's Cathedral in Moscow, Mamayev Hill in Volgograd and Mount Elbrus, the tallest mountain in Europe. Geyser Valley led with 48 percent of the vote.

The project's goals included attracting attention to historical, cultural and natural monuments in need of preservation and restoration. 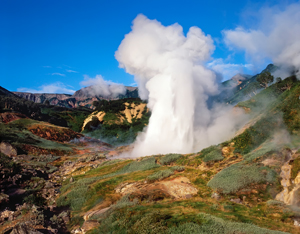 This gem of the Russian Far East contains hot natural fountains clouded in vapor and iridescent rocks, all bathed in luscious greenery. The valley has more than 200 thermal springs, including 90 geysers, which spurt boiling water dozens of feet into the air.

The cathedral dominates Red Square and is Russia's most famous symbol. An unprecedented sample of ornate Byzantine- and Oriental-tinged Russian architecture, it was built in 1555-1561 under the orders of Tsar Ivan the Terrible to commemorate the conquest of the Kazan Khanate. The cathedral has nine iconostases with 400 16th-19th century icons, as well as some impressive murals. A chalice donated by Tsar Alexei Mikhailovich, the father of Peter the Great, is one of its most precious possessions.

This majestic mountain is in the Caucasus. Its western summit is the highest point in Europe and Russia at 15,554 feet. A volcano dormant for 2,000 years, it is crusted with glaciers feeding mountain streams.

In pagan times, these erosion remnants on the Man-Pupu-Ner Plateau (870 miles northeast of Moscow) were worshipped by the local Mansi tribe for their fantastic shapes, and are still known as Mansi Idols today. They have clustered in the Troitsko-Pechersky District of the Komi Republic in the Ichotlyaga and Pechora interfluve, and vary in height from 100 to 140 feet.

Known as the "Northern Versailles," it was built, rebuilt and redecorated for more than two centuries. The park, with an area of 52 acres, has several thousand fountains and does not use a single pump to this day.

7. Mamayev Hill and the Motherland Statue