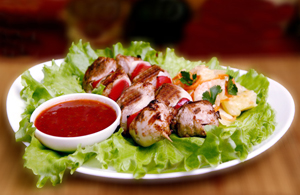 Shashlik: Great food for any season

Once united, the former Soviet republics have traveled in vastly different directions from one another. But there is still at least one thing that even the most bitter of post-Soviet enemies can say they have in common, and while it might not be enough to get treaties signed at the UN, it certainly will get people of all nationalities to sit down together at the dinner table. What I'm talking about, of course, is that most beloved, most widespread of all Eurasian dishes: shashlik.

The origins of shashlik (skewered meat cooked over coals or wood) are unclear. Indeed, this simple, yet delicious dish is by no means native to Eurasia alone, as lovers of Turkish shish kebab or French brochettes will tell you. Regardless, just about every former Soviet Republic, from Russia to Kazakhstan, claims to be the undisputed "Home of Shashlik," the one place in the world where meat is grilled correctly. The good thing is that these disagreements result in fired-up coals, rather than artillery fire.

In Russia, shashlik is known as one of the ultimate summer foods. Below is a popular Russian shashlik recipe, and a spicy sauce to go along with it.

5. Skewer red peppers and cherry tomatoes and grill for 5 minutes.

6. Remove vegetables and meat from skewers and serve.

Here's a spicy favorite for sauce from the Caucusus:

Saute onions and garlic in oil, then add tomatoes. Cover and cook for 45 minutes, or until tomatoes are soft. Put tomatoes through a food mill or strainer. Return the sauce to the pan and add the remaining ingredients. Cover and let simmer for 10 minutes. Serve hot or at room temperature.