... But we are Champions 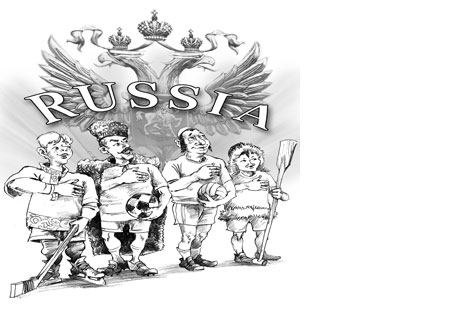 Less than a year ago, an Ossetian friend and I met to decide which team - Russia or England - we should support in a match for the right to contest the final stages of the Euro 2008. It seemed a foregone conclusion for whom two citizens of one country should root. But it emerged that I supported England, because "Russia always loses", and my friend backed Russia, because one of the team's players was an Ossetian. Six months later, in June, I caught myself having genuine feelings for Russia. What had changed?

It so happened that during in between times the country called Russia had scored several victories - its hockey team won the world championships, its football club Zenit from St Petersburg took the Uefa Cup, and Russian crooner Dima Bilan came top in the Eurovision song contest. All these victories had an unexpected result: Russians who all but yesterday nearly spat on the TV screens whenever Russia played in any of these fixtures, now chanted "Russia, forwards!" in the streets and sent each other text messages reading: "Hurrah, hurrah, hurrah!"

The reason is simple, however cynical: the winner always has a larger following than the loser.

Of course it is absurd to feel proud for your country just because it has scored a sports triumph. Some people will argue that it is not a victory with a big V which we should be proud of and say we share in it because we live in this country. It all depends on the scale, we can answer. If we win something that millions of people are interested in and hold dear, it is a victory no matter how comic the focus of interest may appear.

It may well be that the first football players who kicked a ball on British playing lawns seemed funny people to casual passers-by. It was strange indeed to see a group of boys running around a field chasing some round object. What sense did it all make? But today football is the obsession of millions. And if tomorrow we win a world championship in juggling beer cans, it would not be funny provided millions of people took a fancy to such juggling.

But no, our opponents would say. "The victory our country won in the Second World War, over Nazism, was the real thing. It made others speak of the greatness of our state and being its citizen was honourable. Today it is show business, call it a football tournament or a musical contest."

But we forget that today we are not fighting enemies or for the right to prevail in any one area - sport, music, or economy. We are waging a struggle within our own society, perhaps unaware of it. We think we are football fans, but it appears we were rooting for our country. We thought we had won sports victories, but it emerged we won in the struggle for a civil nation. This is an undeclared struggle going on inside all of us. Inside a society that currently inhabits the territory of the Russian Federation, inside each of us: a Russian, a Tartar, an Armenian, or a Buryat. When a Russian, a Tartar or an Ossetian starts cheering "Russia, forwards!" and supports a Russian national team not because it contains players of his ethnicity, but because he perceives himself and the team to be part of one whole, to be his country, this is what is called being a citizen of your country.