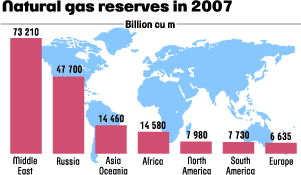 Gazprom has confidently grown from a national into a global energy leader, said Miller. Over the past seven years, its value has grown more than 30 times, to as much as $350bn. It has become the world's third largest joint-stock company, and this is not the end. Gazprom is destined to become the leader, which is logical in the case of a company that has the world's largest energy resources, including natural gas, oil and electricity.

Responding to Itogi, a Russian weekly, about whether the experience of RAO UES, which has been split into private joint-stock companies, can be applied to Gazprom, Miller said: "This is impossible. The gas sector has a fundamentally different structure. A power plant can be built anywhere if there is a customer. But the pipelines need to be laid to the customer, which is the most expensive part of the gas business. Investment in gas transportation is twice the investment in production."

Gazprom is now beginning to develop gas deposits on the Yamal Peninsula. The company has enough funds to finance its challenging investment programme, the CEO said. Its investment will reach $30bn by the end of the year. "As for a reform similar to the electricity reform, I can tell you that vertically integrated companies work in almost all countries that have addressed the task of developing huge deposits and transporting natural gas large distances," Miller explained. "Therefore, we are surprised by some Western politicians proposing vertical disintegration and protectionist measures against Gazprom.

"Such EU actions are politically motivated and have no connection to liberalising the natural gas market and enhancing competition. In fact, we don't think vertical disintegration will make the market free and prices low. Rather it will create obstacles to large investment in new projects aimed at supplying energy to Europe."

Hydrocarbons production in the North Sea is plummeting, whereas potential gas requirements in the world are expected to grow sevenfold in the next 20 years, and there will be no alternative to gas with comparable efficiency for at least 50 years, Miller explained.

"However, some hotheads claim Gazprom is dangerous and that Russians must be stopped. But they have nobody to replace us with.

"Frankly speaking, we are surprised by the demand to restrict Gazprom's operation in Europe. They should not try to stop us, but thank us for implementing new export projects spearheaded beyond 2013.

"We can earn much more and at lower costs at home by that time. Europe and Asia now have a powerful rival, Russia's domestic market. In three or four years we will receive equal profits from export and sales on the domestic market.

"Some people wonder if we should stop our supplies to Europe, saying this would be one headache less for us. But we think cooperation is better than isolation. So our foreign partners can rely on us; we can satisfy the whole of their solvent demand for natural gas."

It is rumoured that gas prices will soar to $400 per 1,000 square metres from the current $179. Miller said the exact figure cannot be calculated now, that it would depend on the European markets, although it is clear that a rise in gas prices in unavoidable.

"We have been speaking about the diversification of Russian gas routes to Europe. In this sense, the interests of Gazprom and the EU countries coincide. So far, more than 80pc of Russian gas is delivered to Europe through one export pipeline, which is not nearly enough. Therefore, we are building two new pipelines, South Stream and Nord Stream. We have agreed on the issue with Austria and will sign an intergovernmental agreement with Slovenia soon."

Speaking of relations with Western partners, Miller said it was generally believed that Gazprom is a company fully controlled by the state. "British newspapers and some US senators have accused us of every sin in the book.

"It is true that the state holds a controlling stake in the company, but private investors hold more than 49pc and the share of foreign investors in Gazprom's capital is growing steadily.

"Everyone knows that the scale of state involvement in the energy business in Europe and the Untied States is at least as large as in Russia. International investors react to these trends more pragmatically than politicians and journalists."

Alexei Miller has recently shocked the international fuel market by predicting that oil prices would soar to $250 per barrel. "What is so surprising about this?" he asks. "The growth of oil prices is connected with a major review of long-term forecasts, which point to a major imbalance of energy demand and supply in the next few decades. The progress of financial operations on commodities markets has forced us to use future prices today. A combination of these two factors has provoked the big leap in the oil prices."

It appears that even the Opec is no longer influencing the oil market, Miller said. "The organisation has not made a single decision recently that could positively affect the situation on the oil market. Many large oil-producing countries have reached their peak production and have limited manoeuvre in output.

"It seems consumers no longer need to fear cartels, because it is becoming increasingly difficult to regulate prices on the global market. It has been suggested that the world needs an Opec-2, which would have fewer members but would be more flexible and have more influence on the market.

"These lessons are likely to be taken into account when considering the idea of a gas Opec."

In conclusion, the Gazprom CEO said his company was currently the third largest in the world, but should aim for the top. Miller predicted that Gazprom's value would grow to $1 trillion in the next seven or eight years.