How Medvedev will rule the world 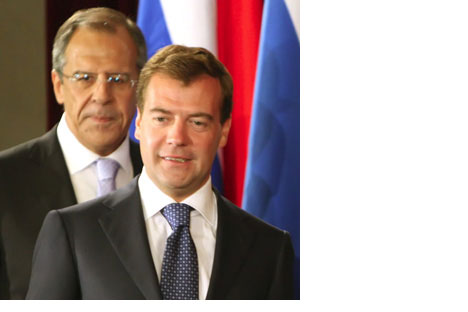 But as it turned out, this was in vain. The text of Medvedev's foreign policy speech could have easily been signed by Prime Minister Putin. Actually, it was drafted while Putin was still President.

What is routinely referred to as Putin's foreign policy did not take shape until spring, 2005. Putin's "new course" put an end to Moscow's unsuccessful attempts to integrate Russia into the West and proclaimed the country's strategic independence.

That was an important decision with all sorts of far-reaching implications. The EU would be more of a partner than a model, and certainly not a future home for Russia. The USA would often be a problem.

Moscow's desire for equal relations with the EU and the US would require asymmetrical policies to compensate for the real inequalities. Even to hold what it regards as its own, the country would need to punch above its weight.

Like Putin, Medvedev realises that there can be no gain in status without advances in modernisation. After all, the oil surge will not last forever. The problem is of course that genuine modernisation would require changing the very system that Putin institutionalised to bring "stability" to the country.

Even if Medvedev and Putin confront corruption seriously, liberate the courts from administrative abuse and proceed with innovative initiatives, Moscow's foreign policy will not become pro-Western. The Kremlin already looks beyond the Western-dominated global system. To Russian leaders, the US is the last Western empire. Rather than associating itself exclusively with the West, Russia is actively reaching out to the aspiring countries of the non-Western world, such as China, India, Brazil, South Africa, Iran and others.

At the very least, Moscow's foreign policy objective is to keep its spot among the major global players, which it joined under Peter the Great and from which it nearly dropped out in the '90s. On a more ambitious level, its objective is to replace US hegemony with an oligarchy of the new global powers, with the US as a primus inter pares and Russia as a sought-after moderator. In anticipation of that regime change, Russia has opted for creating options to US domination.

The core element of Russia's asymmetrical strategy calls for pitting US economic and military power against existing international law. As a lawyer, Medvedev is particularly well-equipped for this. By raising objections to Western actions in Kosovo, Myanmar, Zimbabwe, Iran or Sudan, Moscow places the US and its allies in a somewhat awkward position. They can either back down and thus acknowledge that the Russian position was correct, which would promote Moscow's role as a guardian of international law, or they could decide to pursue their legally questionable policies at their own risk.

Those in the West who had granted Medvedev a grace period to prove himself different to or independent of Putin, are dismayed by his handling of the Zimbabwe issue. At the G8 meeting in Japan, Medvedev said he would support "financial and other measures" against Zimbabwe for the country's crackdown on opposition activists. Several days later, however, Russia joined China in vetoing a UN Security Council resolution to impose sanctions on Zimbabwe. Whether the Western dismay was genuine or the vote was forced merely to cut off illusions about "Medvedev the liberal", it means the West continues to be stuck in the past in its thinking about Russia.

Waiting for a liberal, pro-Western Godot in the Kremlin is a losing proposition. And hoping for a dramatic plunge in oil prices to bring Russia to its senses is not any more promising. But a modernised Russia is more likely to emerge as a capable competitor than pliant partner.

You don't have to agree with Medvedev's foreign policy to acknowledge that one exists. What the West needs is a policy of its own for dealing with a country that it cannot change.