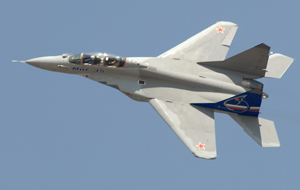 "Under Gorbachev, the idea of universal disarmament was extremely popular not only in the intellectual circles, but also among some decision makers," recalled Vadim Medvedev, number two in the Central Committee of the Communist party of the Soviet Union between 1986 and 1988, and one of Gorbachev's closest associates.

Twenty years later, this idealism gave way to cold pragmatism and a business mentality on Russia's side. "One can even call the current Russian policy on arms exports a mercantile one," said Fyodor Lukyanov, the editor in chief of the Russia in Global Affairs magazine. "The idea behind it is this: if the United States leaves just about all existing arms control agreements and expands its arms exports to our traditional markets, how can it expect us to behave otherwise?"

This transition was gradual. The first disappointment came with the so-called conversion, ie the reorientation of military industry to civilian production, which failed to deliver the expected results both in the late 1980s and in the early 1990s.

The widespread belief that the generally efficient Soviet defence industry could be made equally efficient in making civilian products proved to be wrong.

Thus, by 1992-1993, the Russian defence industry resumed searching for customers abroad, trying to regain its number two position (after the United States) on the world arms market, which appeared to be hopelessly lost to Great Britain back in the late 1980s.

"At the time, the Russian state scrapped the monopoly on foreign trade, which it had been holding since the 1920s," said Ivan Safranchuk, a former representative of the Washington-based Centre for Defence Information in Moscow. "A lot of people interpreted it as a green light to uncontrolled arms exports. Numerous trading companies, sometimes with unclear credentials, started to sell abroad anything that could be sold, from Kalashnikovs to MiG fighters."

Only by the mid-1990s did the state start to bring back a kind of order to this sphere, establishing the State Committee on Arms Exports (Rosvooruzheniye) as the main body coordinating the work of numerous defence industry plants, which preferred reorienting themselves to foreign markets as orders from the Russian Ministry of Defence became scarcer. This allowed the Russian defence industry to survive, even as, in 1996, the Russian army stopped buying tanks from its own industry.

The other dose of oxygen for the Russian defence industry came from central and eastern Europe, where the former Soviet bloc countries, having overcome the initial difficulties of transitioning to a market economy, began upgrading their old Soviet-made weapons in order to fit the standards of Nato, whose expansion became inevitable starting in 1993.

The cheapest and the most secure way of doing this was by using the services of Russian companies, which increased their expertise in adapting the Soviet-made weapons to Nato standards. Romania learnt it the hard way in the late 1990s, when it tried to modernise its Soviet-made MiG-29 fighter planes using the services of an Israeli company, Elbit. The Russian RSK MiG Company refused to supply the needed documentation and the upgrading never took place.

However, success stories were more common. In 2004, MiG signed a contract on modernisation of 12 MiG-29SD planes for the Slovakian air force, and the contract was fulfilled. In the 1990s, Russia supplied the former Soviet bloc countries with weapons to the tune of $3.7bn. However, after the expansion of Nato in 1999 to the territories of Poland, Hungary and the Czech Republic, the market of central and eastern Europe countries started to be closed to Russia, as these countries began getting privileged contracts from the US. In the last few years, Russian arms exports to new Nato members did not exceed $50m per year.

"This was why we objected to Nato expansion," said Vladimir Shumeiko, a professor at the Diplomatic Academy of the Russian Ministry of Foreign Affairs and the chairman of the Federation Council in 1993-1996. "We were not afraid of a military attack from Nato, but we realised we were losing important markets for our defence industry.

"Right now, among all Nato members, only Greece has ordered substantial supplies of Russian weapons. There appears to be a sort of an iron curtain which separates us from the Nato countries' market." Russian experts not infested with anti-Western paranoia lament the lack of trust between the Western powers and Russian arms manufacturers, seeing it as one of the reasons for the general souring of the Nato-Russian relationship.

"Those companies of the Russian military complex that managed to benefit from cooperation with the West have a completely different view of Russia-Nato relations, a much more positive one than before," said Dmitry Trenin, the Russian co-chairman of the Moscow Carnegie Centre. "These include corporations involved in space research and a few others. Unfortunately, they are far from being the majority." The generally negative impact which Nato had on Russian arms sales to Central European countries may be one of the reasons for Russia's unwillingness to see Ukraine join the alliance.

Another possible future member, Georgia, which has tried to sever any ties with Russia and even had American-made M4 rifles replace Kalashnikovs as the main combat weapon of its army, is already considered to be "lost" to Russia's defence industry. But Ukraine, which had traditionally held a large chunk of the Soviet military industry on its territory before the Soviet Union collapsed in 1991, is another matter.

"Ukraine still has a strong defence industry potential, including the huge tank plant in Kharkov and a very strong Antonov aviation building company," said Vladimir Zharikhin, deputy head of the Moscow-based Institute of CIS countries. "But it should understand that this potential is usable only in cooperation with Russia. Joining Nato will make this cooperation very difficult."

As an example, one can cite the fate of the military transportation plane AN-70, which was designed in the Soviet Union in the mid-1980s, and whose renewed production was scheduled to be started as a joint Russian-Ukrainian project in 2001-2003. "The idea was a very sound one. Opportunities for export were also excellent, since the European armies have no transportation aircraft, and would have to go to Afghanistan by train if Ukrainians had not leased them their planes," said a source in the Russian defence ministry. "But under the current state of relations between Moscow and Kiev, this project is hardly viable."

Will Russia be able to survive without European markets for its arms? Most of the experts believe it will. Even China, the indispensable trading partner during the 1990s, is far from being a monopolist now; such partners as Vietnam, India and even former Soviet republics have more and more resources for their own purchases.