Role of wars in History 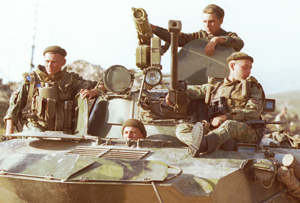 History has always been a political instrument, both in domestic and international struggles. It was used especially actively in the last century for propaganda purposes, and paradoxical as it may be, the history taught to Soviet schoolchildren was in many ways more objective than that taught in Western countries. In many of the strongest countries in the world, children do not really receive a gently skewed picture of historical events and dynamics (which would be completely natural, since every country wants to highlight its successes and accomplishments). They receive no kind of cohesive picture at all. This especially occurs in the history of the most grandiose and tragic event of the 20th century - World War II - to the point where what is written in textbooks and transferred to the consciousness of American and European young people is completely unrecognizable.

In this special edition of Expert, we are not going to discuss the tragic sides of the USSR's domestic policy - the political repression, the relocation of entire peoples, or the ruthless blows dealt to entire layers of society such as the peasantry. The large-scale victimization and suffering that often accompany revolutions and similar colossal societal transformations are by and large a country's internal problems when they occur. Here we offer a selection of articles that mostly concern the crimes committed by one country against the peoples of other countries, as well as the history of genocide that in no way fits into the "excusable" framework of a national political battle. Therefore, any reprimands about how we are ignoring the "criminal nature" of the Soviet regime would be out of place here.

Of course, neither the Soviet Union nor the Russian Empire was a bastion of unique and highly moral foreign policy. However, calm analysis shows that here we are no worse than many others, and we even look better than a lot of countries, if such a comparison is really possible between crimes.

It is impossible to deny the negative, strict, and sometimes harsh aspects of the USSR's foreign policy. We should look at our own history soberly and be unafraid to realize this and to discuss the confusion, mistakes, and crimes if necessary. This will only make us stronger and help us to avoid mistakes in the future.

However, we should also remember others' crimes - not so that we can blame them for committing them at every available opportunity, but so that we can try not to allow the terrible tragedies of the past to happen again.

We should recall the mass shootings of captive Polish officers. Katyn has become a symbol of those shootings. It is important that Russia has admitted to this crime. However, Poland continues to demand new apologies and penances from us; Polish politicians continue to play the anti-Russian card to achieve their own aims; the Polish intelligentsia uses the Katyn tragedy to strengthen the Polish national spirit.

But maybe the Poles should remember something else while they are strengthening their spirits - for example, the answer to the question of why, out of the 380,000 Jews that remained alive in Poland in 1945 after Hitler's genocide, only 6,000 remained in the country by 1970? Maybe the Polish could discuss the secrets of the oh-so-effective techniques in the final solution to the "Jewish question"? And why shouldn't Andrzej Wajda make a movie - a companion piece to the film about Katyn - about the destruction of several tens of thousands of soldiers and officers from the Red Army who were taken prisoner after Tukhachevskiy's unsuccessful invasion of Warsaw? They did not bother to shoot them; they simply starved them to death.

Or there are the Baltic States, which accuse us of every sin possible, many of which are imaginary. SS departments were formed in all these countries - entire divisions that carried out punitive operations. The European Union has effectively abetted not even the rehabilitation, but even the praise of these SS members - in Estonia, for example. And the USA and Great Britain are not at all embarrassed about the fact that they purposely bombed civilian targets in order to destroy as many people as possible using the most horrible methods (in the bombings of Dresden and Hiroshima, for example).

We understand that it would be naïve to expect politicians of the strongest countries in the world to give honest, moral evaluations to historical events. Interests (national and often personal) dominate, unfortunately. But we ourselves must not buy into other people's propaganda. We should have our own understanding of world history and our country's role in it. And that role is quite a large one.