The Grand Game of Symbols 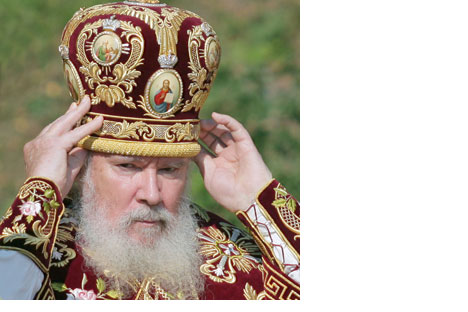 The patriarchs have gone to their respective homes, Kiev police reported no casualties, and the workers have disassembled the podiums, where the dramatic celebrations for the 1020th anniversary of Christianization of Rus' took place last weekend.

Clearly, the idea of a national Ukrainian Orthodox Church fully independent from Moscow has been an obsession of the Ukrainian "nation builders" ever since the breakup of the Soviet Union. They see it as a missing pillar of Ukrainian sovereignty. Building upon the earlier attempts to create a breakaway church during the Civil War and under the Nazi occupation, such church groups reemerged in the early 1990s with the support of a nationalist movement and the first Ukrainian President Leonid Kravchuk. At least two such denominations number today about 5000 parishes, but they were never recognized by the world's family of sister Orthodox Churches and are perceived as schismatic. The majority of Ukrainian Orthodox, however, remained loyal to the Moscow Patriarchate, which granted an unprecedented degree of self government to what became the Ukrainian Orthodox Church (Moscow Patriarchate). Today, it numbers about 11000 parishes. But it is exactly the symbolic connection to Russia that, on the one hand, attracts many people to this church and, on the other hand, makes it an object of hatred in the divided Ukrainian society.

This schism of the Ukrainian church and society was manifested during the 2004 elections that resulted in the Orange Revolution, and resurfaced again last weekend. The strange 1020th anniversary (who would celebrate 1020th anniversary of anything?) was seen in Kiev as a "correction" to the Moscow-centered Millennium, celebrated 20 years ago. And it generated a truly Byzantine intrigue. President Victor Yushchenko appeared so desperate to unite Ukrainian Orthodox into a sovereign church that he nearly created another schism not only in the Ukrainian Church, but in the world of Orthodoxy. In order to sideline the Patriarch of Moscow, he invited and gave a royal welcome to Patriarch Bartholomew of Constantinople (Istanbul) - the successor to the Byzantine patriarchs of the "New Rome" who had baptized Kiev in 988 and to the Ottoman Empire's patriarchs who ruled the See of Kiev when it was under Polish domination from the 14th to the 17th century. He holds the Ecumenical Patriarch title and a position of "first among equals" in the unruly brotherhood of Orthodox patriarchs, where the boundaries of his authority are often disputed.

There were two scenarios at play. One would have Patriarch Bartholomew re-establish his jurisdiction in Ukraine, disavowing his predecessor's 1686 recognition of Moscow's rule over Ukrainian Orthodox, and accept the Ukrainian breakaway groups. In this case, Moscow would have inevitably broken communion with Constantinople, thus generating the greatest schism Orthodox Christianity has seen since 1054, when Rome and Constantinople ceased to be one Church.

Another scenario would have pushed for an early recognition of an autocephaly, or full canonical independence, of the Ukrainian Orthodox Church, which is presently part of the Moscow Patriarchate. This would have led to numerous parishes, monasteries and even dioceses breaking away from the even canonically recognized independent Ukrainian Church and asking the Patriarch of Moscow for direct jurisdiction. Archbishop Ionafan of Tulchin and Bratslav in central Ukraine said during a roundtable discussion at RIA Novosti this week that on the eve of the Council of Bishops in Moscow last month, where the issue was to be discussed, some 300 priests of his diocese held a meeting and told him that if he returns from Moscow with a decision on autocephaly, he "better get off the train somewhere on the way."

Due to hasty last-minute diplomacy - both at the church and the government levels - none of the above scenarios were realized during the days of celebrations. Although Patriarch Bartholomew used the term "annexation" in regard to the 1686 transfer of Ukrainian dioceses from his see to the see of Moscow and declared his Church the Mother Church for the Church of Ukraine (in a canonical and not historical sense, this would mean his right to change the status of the daughter church), he treaded carefully. He did not meet publicly with the breakaway church leaders, and did not make any proclamations that would upset the status quo; he did not respond to Yushchenko's plea to bless his dream of a national church. Two patriarchs - Bartholomew and Alexy II - celebrated the Divine Liturgy together, which is the ultimate manifestation of unity for the Orthodox, and held talks - for the first time since 1997. Although no official paper was signed, Russian and Ukrainian church diplomats said they decided to refrain from unilateral moves and to create a commission to resolve their differences.

So, in a way, no news is good news, and the main result of the entire hullabaloo. But it is only a tactical and temporary victory for the Moscow Patriarchate in Ukraine. It is also a tactical victory for the churches - in Moscow, Kiev and Constantinople - in resisting government pressure.

The issue of the Ukrainian schism remains unsolved and is likely to continue as such at least as long as the self-proclaimed Patriarch Filaret of Kiev, who had been anathematized by the Moscow Patriarchate, will stay active. The Ukrainian issue is likely to be on the agenda of the pan-Orthodox conference in Istanbul in October, and it is still unclear whether the Moscow Patriarch will attend, or which position he is going to take. Constantinople Patriarchate's diplomacy is also known to have changed face. The Ukrainian government and "nation builder" intellectuals are unlikely to stop applying pressure and play on the contradictions between Moscow and Constantinople. For it, the church issue is one of its main battles in defining Ukraine primarily in opposition to Russia. And this does not bode well for the Russian-Ukrainian relations in the foreseeable future.

One unexpected result of the celebrations, however, is a serious strengthening of the Ukrainian Orthodox Church (Moscow Patriarchate) - both in terms of thousands of believers who gathered to greet Patriarch Alexy II and shouted "Alexy is our patriarch!" and in terms of forging a Ukrainian identity, which is not simply that of a branch of the Russian Orthodox Church as its opponents like to brand it. Not only did Patriarch Bartholomew explicitly recognize just this church and not the breakaway groups. In the tone of their statements and in the entire behavior during the celebrations, both the ailing Metropolitan Volodymir of Kiev and All Ukraine and his young aides have clearly distanced themselves from avidly pro-Russian political forces and employed a conciliatory vocabulary previously unheard, at least from Moscow. In the protocol of the events in Kiev, Metropolitan Volodymir was de facto already treated by other church leaders as a head of an independent Orthodox Church.

If the Ukrainian government corrected its policy of supporting the breakaway church groups, if the Ukrainian Orthodox Church leadership managed to continue treading a careful line as a truly national Ukrainian force without alienating its pro-Moscow members, if facing a suddenly real threat of a global Orthodox schism, the patriarchates of Moscow and Constantinople had managed to at least narrow their differences, we would soon see a fully canonically independent Ukrainian Orthodox Church on the basis of Metorpolitan Volodymir's church, and not on the basis of the breakaway groups. Most of them would then join the united Church of Ukraine.

Paradoxically, the drama of the Kiev intra-Orthodox intrigue also increases the chances of a first ever meeting between Patriarch Alexy II and Pope Benedict XVI. Apart from the marked improvement in the relations between the Russian Orthodox and Roman Catholic Churches since the election of Pope Benedict, in the grand symbolical church political triangle of Rome, the "New Rome" (Constantinople) and the "Third Rome" (Moscow), it would be time to strengthen the Moscow-Rome diagonal for Moscow to gain weight in the hard game of influence with Constantinople ahead.