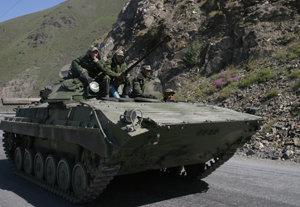 The escalation of the conflict between Georgia and Russia over South Ossetia and the spread of military action beyond the borders of the unrecognized republic have led to a change in the positions of the United States and other Western countries. Not only are they calling Moscow's actions "dangerous and disproportionate," they are now threatening Moscow with worsening relations. In response, Russia has said it will take a harder stance on other issues that are more important to the West. Thus, not only are the military action not likely to end soon, there is a threat of serious cooling between Russia and the West.

The shift in the Western attitude toward what is happening in Georgia came when reports started to emerge of Russia bombarding Georgian towns, Gori, in particular, and of Russian aviation striking airports deep within Georgian territory. In the first days of the war, the Western reaction was reserved and amounted mainly to expressions of concern and calls for an end to the bloodshed. Moreover, a high-placed U.S. State Department source told Western journalists on the condition of anonymity that Georgia bears "part of the blame" for the escalation of the conflict and the United States had been pressing Georgian to avoid conflict with the Russian armed forces at any cost. Government spokesmen in Washington made different declaration over the weekend, however.

The U.S. called Russia's military activities in Georgia "dangerous and disproportionate." U.S. Deputy National Security Advisor James Jeffrey, with U.S. President George W. Bush in Beijing, stated directly that the U.S. will be "very, very concerned," if reports of Russian strikes against targets inside Georgia are confirmed. He also threatened that continued escalation of the conflict with Georgia would damage relations with Washington. It was perhaps the most unambiguous warning the U.S. has made to Russia about worsening relations because of an armed conflict since 1991.

A high-placed employee of the White House spoke even more sharply on condition of anonymity. He said that Russia's use of significant military force, including bombardment and ballistic missiles, in regions far from South Ossetia is incomparable with the threat that Moscow has made reference to and it represents "a dangerous escalation of the crisis." The U.S. administration source also chided Russia for its unwillingness to stop military action. "Georgia has proposed a ceasefire, and Russia increased its offensive in response, including bombing civilians and turning down international mediators," he said. "That is incomprehensible and disproportionate to us." And, as if in confirmation of those words, yesterday evening the U.S. introduced a resolution into the UN Security Council condemning Russia's actions in Georgia.

Russia has also received warnings from the European Union. France, which is currently chairing the EU, late Saturday evening made a special announcement that made direct reference to possible negative consequences for relations between Moscow and Brussels from Russia's military action against Georgia. The leaders of the Baltic countries and Poland went even farther. In a joint statement, they condemned "the actions by the Russian military forces against the sovereign and independent country of Georgia" and say that "it is pointlessness to continue a `visa facilitation' program with a country that does not meet even the minimal requirements set by the EU."

French President Nicolas Sarkozy suggested a plan to halt the conflict in South Ossetia on the behalf of the EU. French Foreign Minister Bernard Kouchner is pursuing that plan and will soon fly to the conflict zone. The plan has three points: an immediate ceasefire, complete respect for the territorial integrity of Georgia and a return to the conditions in the region that exists before the military action. The EU foreign ministers will consider the perspectives for the implementation of the plan at an emergency meeting in Brussels on Wednesday.

Kommersant sources in Western diplomatic circles think that the question of sending an international military peacekeeping contingent to Georgia may be discussed at that meeting. The Kommersant sources say that the West has to hurry with it, because Russian aviation has already destroyed almost all the runways of Georgian airports, struck the port of Poti and begun a naval blockade of Georgia, which will make transport of any military personnel to Georgia technically and logistically complicated.

Kommersant sources close to the Kremlin say that German Chancellor Angela Merkel and the U.S. president are pushing hard for the acceptance of the EU plan. They spoke by telephone with Russian President Dmitry Medvedev at the end of last week. Moscow is in no hurry to follow Western recommendations, however. Even after the Russian embassy in Tbilisi received a note yesterday evening saying that, by order of the president of Georgia, the armed forces have stopped firing on South Ossetia and are withdrawing from the conflict zone, the Russian Foreign Ministry calmly responded that it was not true.

Moscow has effectively issued an ultimatum: first Tbilisi will withdraw all forces from the territory of South Ossetia and sign an agreement on the nonuse of force against South Ossetia (and Abkhazia at the same time), and then it will talk about ceasing military actions. Kommersant sources say that is what Medvedev told the German and U.S. leaders. Russian Deputy Foreign Minister Grigory Karasin confirmed that yesterday. "Obligations recorded on paper are necessary, because the words of Georgian leaders cannot be trusted in statements," he said.

Karasin made one other noteworthy statement yesterday. "As if on command, several countries have taken positions critical of Russia and are now hindering operations to enforce peace, casting doubt on the methods, goals, timing," Karasin seethed, and added, "Moscow will take that into account in the future, when it conducts negotiations on the world order."

The final phrase is an unambiguous warning from Moscow that, if the West does not let it finish what it has started in Georgia, it will take firmer stances on other issues that are more important to the West. If that is so, then there is no reason to expect military actions in Georgia to stop soon. That, in turn threats a serious cooling in relations between Russia and the West.

Western countries and politicians, with rare exceptions, have unequivocally backed Georgia. Making it clear that they consider Moscow the aggressor, the majority of countries have called for an immediate stop to the bombing and a withdrawal from Georgian territory.

On Saturday, both U.S. presidential candidates spoke critically of Russia's actions in the Georgian-Ossetian conflict. "For many years, I have warned against Russian actions that undermine the sovereignty of its neighbors. Unfortunately, we have seen in recent days Russia demonstrate that these concerns were well-founded," Republican John McCain said on Saturday, confirming his reputation as a harsh critic of Moscow's policies. "Tensions and hostilities between Georgians and Ossetians are in no way justification for Russian troops crossing an internationally recognized border. I again call on the government of Russia to immediately and unconditionally withdraw its forces from the territory of Georgia." McCain has spoken by telephone with Georgian President Mikheil Saakashvili twice since the crisis began.

Barack Obama, the Democratic contender for the White House, made a similar statement. "Russia must stop its bombing campaign, cease flights of Russian aircraft in Georgian airspace, and withdraw its ground forces from Georgia. The current escalation of military conflict resulted in part from the lack of a neutral and effective peacekeeping force operating under an appropriate UN mandate," Obama said. "Russia cannot play a constructive role as peacekeeper."

Yesterday, U.S. Deputy National Security Advisor James Jeffrey, accompanying U.S. President George W. Bush in Beijing, made it clear that continued escalation of the conflict with Georgia over South Ossetia would damage relations between Washington and Moscow. France, which is chairing the European Union at the moment, made a similar statement on the behalf of that organization, saying that "continued military action will influence relations between the European Union and Russia."

Poland proposed an emergency EU summit be held on the subject of the situation in the conflict zone. "The territorial integrity of Georgia is being violated on an unthinkable scale. They are bombing Georgia, civilians are being killed and foreign forces are located on Georgian territory," commented Polish Foreign Minister Radoslaw Sikorski.

At the same time, Polish President Lech Kaczynski and the three presidents of the Baltic countries issued a joint declaration in support of Georgia, with a call for the international community to intervene in the conflict. "The EU and NATO must take the initiative and stand-up against the spread of imperialist and revisionist policy in the East of Europe... The Russian Federation has overstepped a red-line in keeping the peace and stability in the conflict zone and in protecting Russian citizens outside its own borders," the presidents wrote.

Swedish Foreign Minister Carl Bildt went even farther, when he compared Russia's activities with the crimes of Nazi Germany and the policies of the late Yugoslavian leader Slobodan Milosevic. "We have seen powers before claiming that the violations of the rights of holders of their passports or their nationality - by a previous Germany in Eastern Europe or a previous Serbia in former Yugoslavia - justify them sending their armies into these countries. We have seen the wars that have followed the application of that principle - and that is why it has repeatedly been made clear that it runs contrary to international law," Bildt wrote.

German leaders have differed in their assessment of the events. Unlike German Chancellor Angela Merkel, who has limited herself to calls for both sides to cease fire and show restraint, members of the Social Democratic Party, a member of the ruling coalition, have essentially blamed Tbilisi for the escalation of tensions. German Deputy Foreign Minister Gernot Erler noted in an interview Saturday on the German radio station NDR Info that, by starting a military action against South Ossetia, Georgia was breaking a 1992 ceasefire agreement. "In that sense, it is a matter of the violation of international law," Erler said, adding that he understands "the Russian reaction" to the events in South Ossetia.