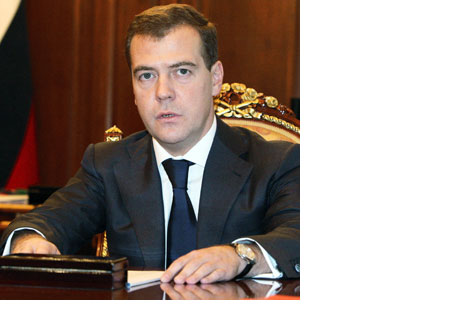 President Dmitry Medvedev said on Tuesday that he had ordered an end to the 'peace enforcement' operation in Georgia, after five days of fighting.

"I have made a decision to end the operation to force Georgian authorities to peace," Medvedev said at a meeting with the defense minister and General Staff chief.

The fighting continued into Tuesday, with Russia bombing military targets in Georgia, and skirmishes reported along the border between Georgia and South Ossetia.

Georgia launched an offensive to regain control of the pro-Russian province, which broke away from Georgia after the collapse of the Soviet Union, early on Friday. Russia, which maintains peacekeepers in the region, responded with a major counterattack. Russia drove Georgian troops out of the ruined capital of South Ossetia, Tskhinvali, on Sunday.

Medvedev is due to meet with President Nicolas Sarkozy of France, which currently holds the European Union presidency, to discuss the conflict on Tuesday.

"The operation has achieved its goal, security for peacekeepers and civilians has been restored. The aggressor was punished, suffering huge losses," Medvedev said.

However, he warned Russia would be ready to respond if Georgia attacks again.

A senior Russian military official said on Tuesday that Russia could withdraw part of its troops sent into the region to help peacekeepers if Tbilisi observes the ceasefire.

Col. Gen. Anatoly Nogovitsyn, deputy head of the General Staff, also said Georgian troops were currently retreating from South Ossetia. He said Georgia had about three infantry brigades, one artillery and three antitank brigades in the region as of Tuesday.