Finding Out Who's to Blame for This War 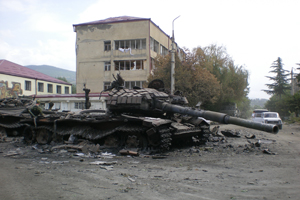 Since Friday, I have been trying to figure out who is at fault for what is happening in South Ossetia. State television claims that the blame lies with Georgian President Mikheil Saakashvili and his supporters in the West. However, I have long ago stopped believing state television reports, even when their statements seem to be true.

From morning until evening, Ekho Moskvy radio has been airing political commentaries describing the consequences of this outbreak of hostilities in Georgia. But they have not provided an answer to the one question that most interests me, "Who started this war?"

The television antenna at my dacha, where I spent the weekend, has been picking up Euronews much better lately, and there I heard the following "objective" information: Prime Minister Vladimir Putin and President Dmitry Medvedev accuse Georgia of carrying out genocide in South Ossetia, while Saakashvili blames Russian aggression. Heart-rending images of the violence filled the screen, with "no comment" as the only explanation.

On Sunday, I received a long-awaited guest at my dacha, Dmitry Furman, a leading expert on former Soviet republics, including the Caucasus. But he had barely stepped through the gate when he said: "Don't ask me what's going on. I don't understand a thing."

Soon after, the news editor for one of Russia's comparatively independent television channels came to visit. She was speaking on her cell phone as she entered the dacha, emotionally explaining that, "Our Olympic Games correspondent, for whom we paid big money for accreditation, transportation and housing, is complaining that he has nothing to do in Beijing and that we should send him to South Ossetia." The whole time we were barbecuing and eating shashlik, she was on the phone trying to work out how her journalists could report on the conflict without interrupting Olympic coverage.

That left me with little choice but to become philosophical regarding my question of who was the first to attack Tskhinvali? It occurred to me that we buried one of Josef Stalin's greatest opponents, Alexander Solzhenitsyn, last week, but the tensions that Stalin stirred up were continuing to exert their influence. It was Stalin who laid down the illogical borders between the Soviet republics. He did so based on the belief that they were so unnatural that nobody would ever dream of trying to tamper with them, understanding what terrible consequences would result.

History has shown that Stalin was overly optimistic. Having lost their fear of Mikhail Gorbachev's democratic Kremlin, nationalist democrats in Soviet republics like Russia, Armenia, Moldova and Georgia began behaving as if the borders that Stalin drew between peoples were actually "historical borders" between states, leading to much bloodshed. After those conflicts and the terrible slaughter in the former Yugoslavia, we hoped that nothing similar would happen in the 21st century. However, the bloodshed has been repeated, and the conflict began on 08-08-08, the day the Chinese considered lucky enough to open the Olympic Games.

I am not a Russian patriot, although I try to force myself to love the country of which I am a citizen. I was, and still am, a citizen of the Soviet Union, a country without internal borders and where friends of different ethnicities and I were united in our hatred of totalitarianism and in the belief that political freedom would give us the opportunity to live in harmony. I have never contested the right of the various Soviet peoples to establish their own states. But I strongly dislike all those little Napoleons — whether they are named Boris Yeltsin, Vladimir Putin, former Georgian President Zviad Gamsakhurdia or Saakashvili — who instead of freeing their citizens from the Stalinist Soviet Union have created mini-empires within illogically imposed borders and played out their delusions of grandeur using the blood of their own people.

Alexei Pankin is the editor of IFRA-GIPP Magazine for publishing business professionals.

Previous articles on this topic: Ossetians Say West Is Behind Conflict