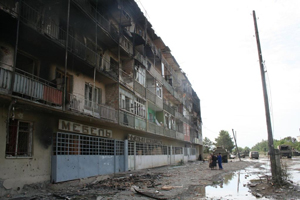 Russia held a day of mourning for those killed during the five days of fighting in South Ossetia on August 13. People from the capital Tskhinvali, which became a battlefield after being attacked by Georgia, are recovering from a nightmare. It's hard to find a citizen who hasn't lost a relative in the conflict.

Meanwhile, Russian peacekeepers are continuing to pull people out from the rubble of destroyed buildings.

A vigil to remember the victims of the violence was held during the night at Moscow's Cathedral of Christ the Saviour.

Funerals continue to take place in the breakaway republic for those killed during the war with Georgia.

Hundreds of people were hiding underground while the city was under attack, which almost completely destroyed the South Ossetian capital. Now the city is quiet. Most of its residents have fled or died.

Authorities add up the losses... More than 1600 civilians and 74 peacekeepers have been killed in five days of violence. The Russian Defence Ministry estimates the losses for Georgian forces are far higher than they claim.

The Chief Priest of the Province, Father Georgy, says 60% of his parishioners were killed.

"They particularly targeted churches because they knew that people tried to hide there," he said.

It will take at least two years to rebuild Tskhinvali, according to the Russian Emergencies Ministry. Moscow is allocating $US 400 million to restore the region and $US 20 million for an emergency search operation.

Russian emergencies Minister Sergey Shoigu said: "If people don't return to their homes and children don't go back to schools and kindergartens on September 1, it means that those who started the war have succeeded in their task. Everything is destroyed. People are gone. Nothing works, nobody lives there. When people and children are gone there is no life."

"And we cannot allow this to happen. We have to do our utmost for the city to keep on living and developing," he said.

Meanwhile, convoys of refugees continue to stream into Russia's southern regions, where they are being provided with food and shelter. And with the humanitarian corridor now open, aid is continuing to arrive. Another convoy of humanitarian aid will arrive in Tskhinvali today.

The total number of refugees from South Ossetia has topped 34,000.

Dozens of professionals are working in refugee camps providing medical and psychological help for the victims of the conflict. Also, volunteers keep delivering food, clothes, water and toys for the children.

Some refugees still remain in a state of shock about what happened to them and their loved ones. Others are crying as they get news from home that their relatives are dead.

"It is a tragedy," said one of the victims. "Why has the world failed to see it? Why have they failed to see that he was gathering more and more weapons! It seems we are back in the 1930s. When Hitler was gaining strength! And everyone turned a blind eye to him! Saakashvili is Hitler number two."

Another woman from a refugee camp said Georgians were shooting at them, burning their homes. But the most frightening thing, she said, "was when they dropped bombs".

"They came in the night," recalls another refugee. "Georgian helicopters shelled the city. We were hiding in basements, but the bullets stopped us from going outside. And the sound of exploding bombs was terrible."

Almost 600 civilians from a refugee camp in North Ossetia will head for the Krasnodar region today, 180 of them children.

With South Ossetia's capital Tskhinvali completely devastated, and more than 30,000 people displaced, the international community is offering aid to those in need.

France has sent a planeload of humanitarian aid and is distributing 30 tonnes of medicine and other necessities among the victims of the conflict.

Meanwhile, British prime minister, Gordon Brown, has expressed his readiness to participate in the relief effort.

Cars loaded with dead bodies continue to arrive at the morgues of Vladikavkaz and dozens of funerals are under way.

Koch Final, a 24-year-old volunteer, was shot near Tskhinvali. His family say they last spoke to him two days ago. He was caught in the middle of an interior barrage of the city.

"At four o'clock in the evening we called him there. He said massive shooting had begun and promised to call back. He never did," his sister recalls.

Valentina Boratova spent three days in a bunker and, during a lull in the fighting, she managed to escape. She says her son remained in Tskhinvali to protect those left behind.

"We always hear disinformation. South Ossetians never attacked anybody, but the Georgians committed the fourth genocide here. They did it in 1920, 1991, 2004 and now," Boratova says.

Refugee camps near the borderare filled with women and children. They have lost their homes as well as their relatives. Many had to avoid flying bullets while trying to find their way to safety.

People here say the number of refugees will only increase. And with it, the cemeteries of North Ossetia will become fuller by the day.

Previous articles on the topic:
Russia's president says operation in Georgia over
Ossetians Say West Is Behind Conflict
Chronicle of the Georgian-Ossetian conflict: Fact sheet
Georgia vs. South Ossetia: roots of a 100-year conflict