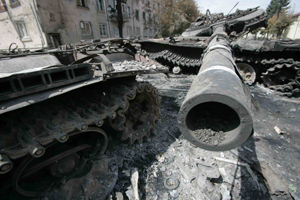 The total number of causalities of the Georgian - South Ossetian conflict has been revealed. According to local authorities the conflict has taken the lives of 1492 Ossetians. More than 5,000 people from South Ossetia are still in refugee camps in the south of Russia.

Approximarely 30,000 people fled from Georgia's offensive on August 8. Many have been staying with relatives or have been taken in by ordinary charitable people. RT met a young family of refugees who are now trying to piece their shattered lives together.

Refugees rely on the kindness of strangers

Whoever's won this war, the Ossetian people have lost the most. Two of them, Ruslan and Khatuna Khelekhsaeva, say everyting they owned in Tskhinvali now lies in ruins.

They are very clear as to who they blame for having destroyed their lives.

"We blame Georgia and America for the war. It's the second time they've bombed us. We can't bear it anymore. No one can guarantee that Georgia won't bomb us again," Ruslan said.

We asked Ruslan whether South Ossetia should indeed break away from Georgia.

"Independence would be good in theory but we cannot defend ourselves against Georgia. So we need to be part of Russia. If Russia didn't support us, then there would probably be no 'us' left on this earth," he added.

Khatuna's eyes cannot hide her pain. She recounts her experience:

"After all we've gone through, I don't want to go back to Tskhinvali. Words cannot describe the five days we spent hiding in our basement, scared for our lives. I am haunted by those memories."

They arrived in North Ossetia to find the refugee camp overflowing. They were taken in by Natalya Gabarayeva, a local woman.

"I'm doing my best to take care of them. I feel so sorry for them. They arrived here with nothing, and needed a roof over their heads," Gabaraeva said.

She added that although local authorities are doing what they can, it is still not enough for the numbes of people that fled South Ossetia.