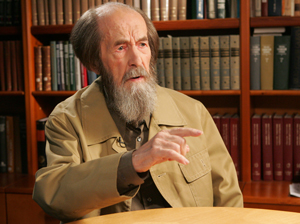 This world is a small place, smaller than ever before. And all the alarming developments in it are closely interconnected. This is certainly not the time for the Russian government to forget even for an instant about national defence and Russia's place in the world, a place we have nearly lost but managed to regain in some measure over the past few years.

As for Russian domestic politics, of all the many national projects and programmes, the government has one essential duty, too important to appear on the list of programmes. That is the SURVIVAL OF THE NATION. The government must guarantee the people's physical wellbeing and moral health. Poverty should not be tolerated even when the underprivileged make up just a fifth of the nation, let alone two thirds. No less essential is universal school education-substantial, stable, smooth and immune to passing administrative trends. Education should be free from confusing influences born of biases.

However, the naked eye fails to discern any sign whatever that the people's needs are being met. Grasping city administrations never care about dilapidated houses. Retail prices continue to skyrocket, cancelling out indexations in no time and making consumers feel robbed and persecuted. And during our absurd two-week long "public holidays" ordinary people don't know how to occupy themselves, especially at Christmas in the harsh Russian winter. Such holidays are convenient only for the rich, who can afford to travel to luxury resorts abroad.

But worst of all is the insidious and all-pervading corruption. Bred by the Serpent, it oppresses the public consciousness. It defies detection, and culprits go unpunished. This is so not only in the upper echelons of society, but also at its grass roots. True, there are too many instances for police to detect, but even that would not get to the root of the problem. We blame it on inefficient authorities while the reason is quite different. The entire moral foundation of the country is shaky. Theft and bribery no longer bring Shame and Repentance in their wake. On the contrary, they are taken for granted, and thieves feel triumphant.

What we urgently need in Russia is a system of local self-government. We need a place where we can speak up without timidity on simple everyday matters everyone understands. For several decades, I have again and again written and spoken to call for free and unfettered local self-government. Russia has known it for centuries, in the form of rural community gatherings, town moots and Cossack assemblies. In the second half of the 19th century there were the zemstvos, efficient elective administrations. The Bolsheviks disbanded them in 1918 to replace them with Soviets, councils promptly subdued by the Communist Party to function only on paper.

Despite its huge gold and currency reserves, Russia will never prosper unless the public takes control of our essential everyday affairs and learns to run them properly.

Direct (rather than representative) public assemblies govern local life in every prosperous Western country today. My family and I spent twenty years in exile, far from the Soviet Union. We had enough time to see and admire these powerful social structures. They ensure effective and dignified participation of ordinary people in local affairs. They stand up for everyday public needs and make decisions for the foreseeable future. Their decisions come to fruition before their very eyes, and they are aware of their direct impact on national life. This impact is felt much more acutely in rural communities and small towns rather than in the capitals, with their big words, sensational events and rumours.

Russians often reproach the Western world-sometimes deservedly-for outdated doctrinal statements by proud speakers in the Council of Europe, praising the tarnished golden idol of Globalism. Preoccupied by our grudges, we overlook the everyday practical boons of Western local self-government. We have never even been properly acquainted with it, for that matter. Meanwhile, the West has much to offer-the smooth practice of self-government, and tangible changes in municipal affairs that the public demanded, and won, because they were topical and generally understandable. The people have every reason to feel satisfied with their everyday victories.

What I have seen in Russia since my return is in dire contrast to these victories. Local self-government is nipped in the bud by regional governors and their advisers. It is deplorably underfunded, and all requests for money are shelved. The State Duma has not passed a single clear and effective bill in its support-and never mind that the vast country that Russia is, will never achieve wellbeing unless central authorities learn to act in tandem with community activists. We must take control of our essential needs into our own hands and wait no longer for arrogant bureaucrats to tackle our problems-or Russia will never be affluent, however vast its gold reserves might be.

It is often said that Russians are no longer able to organise. That's not true. There are many effective public campaigns. Swindled housing investors standing up for their rights and car owners lobbying for safer roads are just two such movements.

Russia faces many urgent challenges-we need a reliable public healthcare system, good schooling, housing and roads, and smoothly run trade. Only local bodies of self-government can achieve these things. And to do so, they need financial and legal elbowroom.

Read a homage that our reader Frank Manheimwrote to Alexander Solzhenitsyn