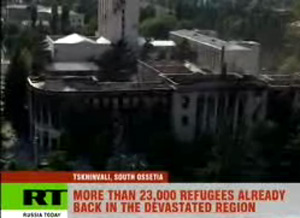 Russia's president signed decrees recognizing Georgia's breakaway South Ossetia and Abkhazia as independent states and called on other countries to follow suit. "This is not an easy decision, but it is the only way to protect people's lives," Dmitry Medvedev said in a televised address.

Both houses of Russia's parliament voted unanimously on Monday on a resolution asking the Russian president to recognize the independence of Abkhazia and South Ossetia, following requests from the leaders of both breakaway republics.

The move will further worsen Russia's relations with the West, already strained over Moscow's response to Georgia's attack earlier this month to retake South Ossetia.

Russian officials have said Georgia lost its right to the two regions after launching a military offensive that killed hundreds of people and forced thousands to flee devastated South Ossetia.