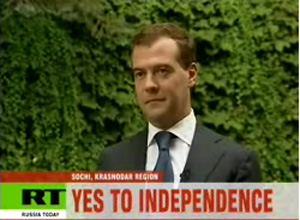 President Dmitry Medvedev warned that Russia could sever all ties with NATO amid a standoff over Russia's response to Georgia's offensive in breakaway South Ossetia.

NATO suspended cooperation with Russia last week, and said "business as usual" could not resume until the country withdraws all troops from Georgia.

If NATO is not willing to cooperate with Moscow, "we will take any decision, up to terminating relations entirely," Medvedev told Russia's envoy to the alliance, Dmitry Rogozin.

"Cooperation is above all in the interests of NATO, not Russia," he said.

Moscow recalled Rogozin from Brussels "for consultations" after NATO froze contacts through the Russia-NATO Council on August 19, accusing Moscow of disproportionate use of force against Georgia. Russia's Defense Ministry later said it was suspending all cooperation with the military alliance.

Russia's large-scale 'peace enforcement operation' came after Georgia's August 8 ground and air offensive in South Ossetia aimed at seizing control of the province. Russia has now withdrawn most of its troops from Georgia, but peacekeeping checkpoints are still in place "to deter further bloodshed."

Medvedev said a decision to sever ties with NATO would be difficult, and that he hoped Russia would not be forced to take such a decision.

"We want our relations to be full-fledged and those of partners, but we do not want an illusion of partnership," the president said. "Naturally we are not happy with being surrounded by military bases, and being told 'do not worry, everything's fine,' let alone with the latest events."

NATO has sent warships into the Black Sea, reportedly to deliver humanitarian cargo to Georgia. Russia has questioned the nature of the cargo, and criticized the bloc's military buildup in the area as destabilizing.

Medvedev has not yet responded to the requests, which are likely to further strain relations with the West.

Prime Minister and former president Vladimir Putin said on Monday that Russia could pull out from some agreements reached during its World Trade Organization WTO) entry talks.