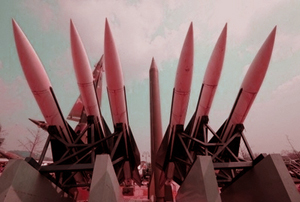 Russian President Dmitry Medvedev has said Russia will have to respond militarily to the deployment of elements of a U.S. missile shield in Central Europe.

The deal to place 10 interceptor missiles in Poland was reached in mid-August, and followed the signing of an agreement on July 8 by the U.S. and Czech foreign ministries to place a U.S. radar in the Czech Republic.

"These missiles are close to our borders and constitute a threat to us," Medvedev said in an interview with Al-Jazeera television on Tuesday. "This will create additional tension and we will have to respond to it in some way, naturally using military means."

The Russian president said that offering NATO membership to Georgia and Ukraine, two former Soviet republics, would only aggravate the situation. He added that the Ukrainian people should be asked their opinion in national referendum. Opinion polls have consistently shown that a majority of Ukrainians are against their country joining the military alliance.

Moscow has consistently expressed its opposition to the U.S. missile shield, saying it threatens its national security. The U.S. claims the shield is designed to thwart missile attacks by what it calls "rogue states," including Iran.

Medvedev's statement came on the same day that Russia recognized the Georgian breakaway republic so South Ossetia and Abkhazia. The move came two weeks after Moscow concluded its operation to "force Georgia to peace" following an attack by Georgian troops on South Ossetia on August.

"We are not afraid of anything, including the prospect of a new Cold War, but we don't want one, and in this situation everything depends on the position of our partners," Medvedev told the Russia Today international news channel on Tuesday.