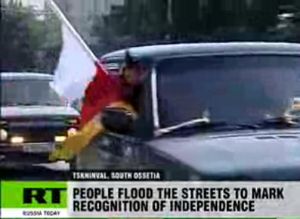 The Russian leadership dramatically raised the stakes in its standoff with Georgia and Tbilisi's sympathizers in the West. On Tuesday, Russia's president signed a decree on the recognition of Abkhazia and South Ossetia, the two separatist regions whose conflicts with the authorities in Tbilisi triggered three wars inside Georgia during the last 18 years. Since Dmitry Medvedev was expected to use the potential declaration as a bargaining tool in the future, many are now perplexed by his speedy decision.

The president's move was a reaction to sessions of Russia's State Duma and the Federation Council, the two chambers of the Russian parliament both of which unanimously voted in favor of recognizing the independence of Abkhazia and South Ossetia. Analysts expected Dmitry Medvedev to put the situation on hold, postponing the action on what was formally a mere recommendation from the parliament. But Medvedev took less than 24 hours to take his stand.

The move comes hot on the heels of Medvedev's Monday statement on a possible termination of Russia's partnership with NATO. To make matters worse, also on Monday Russia's Prime Minister Vladimir Putin said that Russia would put the implementation of several commitments it took upon itself as an aspiring member of the World Trade Organization (WTO) on hold. Vice Premier Igor Shuvalov said that Russia will fulfill these commitments again only after it is allowed to join the WTO, on whose door Russia has been knocking since 1993.

The decision to recognize Abkhazia and South Ossetia puts Russia on a collision course with the United States and EU countries, all of whom recognize Georgia's sovereignty over Abkhazia and South Ossetia. On Sunday and Monday leaders of the United States, Germany and other Western countries specifically warned Russia against officially recognizing South Ossetia and Abkhazia, which had become de facto independent states after "wars of secession" with Georgia in 1991-1993.

"I am worried by decision of the State Duma on the recognition of Abkhazia and South Ossetia," Germany's Federal Chancellor Angela Merkel said on Monday. "I expect the Russian president not to sign this resolution." American President George Bush also repeatedly demanded respect of Georgia's territorial integrity on behalf of Russia, backing up his words with a dispatch of two American warships to Georgia's Black Sea coast, where these vessels are in dangerous proximity to Russia's Black Sea fleet. Officially, the American warships are supposed to deliver humanitarian aid to Georgia, but Russian sources suspect that they could deliver arms and other kinds of support to the Georgian military, whom the United States has been arming and training for the past ten years. So, what prompted the Russian leaders to raise the stakes at this very moment? Hours before Medvedev's decision was announced, even pro-Kremlin political analysts suggested that Medvedev would put the situation on hold, using implementation of the parliament's resolution as a sort of an "ultimate weapon" to be activated only in case of dire necessity.

"If Moscow takes a pause on this issue, that would give Russian diplomacy additional possibilities of negotiating with Western partners, pushing them toward decisions which would suit Russia's interests," Vyacheslav Nikonov, the president of the Unity in the Name of Russia foundation, said on Monday. "The legal recognition is a sort of a trump card which one would better keep up one's sleeve instead of using it now."

Nikonov's foundation, Unity in the Name of Russia, is unofficially considered to be the think tank of the ruling United Russia party, and his other foundation, Russky Mir, was created on former president Vladimir Putin's special order. The fact that he was not informed of the Kremlin's move on Tuesday speaks to the spontaneous character of Medvedev's move. Other influential political think tanks also expressed mild surprise at the Kremlin's speedy decision.

"I think Russia acted without due consideration and restraint," said Dmitry Suslov, the deputy chairman for research at the Center for Foreign and Defense Policy (SVOP), an umbrella organization uniting Russia's most influential analysts and decision-makers. "This move can leave Russia strategically isolated. I don't think we shall face economic sanctions from EU countries, while U.S. sanctions, if imposed, will not have impact due to the small scale of bilateral trade. However, Russia's move will most likely anger China, which has a problem with the separatist Taiwan. China may not voice its dissatisfaction openly, but Russo-Chinese trust will be dealt a blow."

Suslov discarded other possible Western sanctions - the expulsion of Russia from the G8 and the suspension the NATO-Russia Council's work - as insignificant and largely symbolic.

Alexander Konovalov, the head of the Institute for Strategic Analysis, was even more outspoken, calling Moscow's move "irresponsible" and "unprofessional."

"This impatient move may throw cooperation between Russia and the West years back," Konovalov said. "Instead of discussing this issue first in the UN, as it was supposed to be done according to the Medvedev-Sarkozy plan, Moscow rushed forward. Even Americans first discussed the issue of Kosovo's independence for almost ten years before moving ahead with making Pristina the capital of an independent state. Why couldn't we wait?"