How I won a Russian Oscar (sketch about Russia) 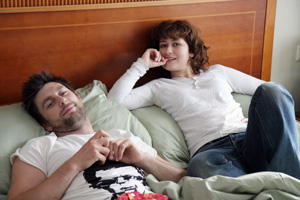 Six months ago, I was a jobbing actor, doing interesting if low-profile work. I'd be the quirky villain in TV serials, the skateboarding geek in Robson Green's "Wire in the Blood", or perhaps treading the boards at Theatre 503 in Battersea. This was before I got my unexpected break, invited to audition with some Russians for the lead in an unknown but "big" film project.

How I got the audition in the first place was a story in itself. One of the guys I was working with at Theatre 503 was in charge of filming casting sessions for the Russians. For some bizarre reason, he was given the opportunity to nominate an actor. So he slipped me in, alone amongst an otherwise solid line up of household English names.

Having just walked in from doing a day's work as a gardener, I was singularly the least glamorous person to be auditioned. So I couldn't say that my hopes were too high. Fortunately for me, however, the director and casting manager were not versed in the British who's who and who's not. I had a blank slate and, to my amazement, got the part.

The days before shooting were hectic. It turned out that the group had sacked the original lead - an American - and for the month prior had been desperately searching for a replacement. By the time I was delivered to Moscow, there were just three days to learn the script and become the master puppeteer my character was supposed to be.

There was never a dull minute filming in Russia. I remember one point where we had to film a party scene, and for this the team decided to throw a real party, complete with real invitees. The only thing we lacked was needed police permission. The producers decided to resolve the issue the usual way: by paying the policemen on duty. Soon the entire local division got wind of this, and once the party was under way, the officers changed every 15 minutes. There came a point when the money simply ran out and the party was closed down.

To be honest, I knew very little about Russia before coming here. I knew about vodka, Ladas and Gazprom. I knew that Russia can be cold and has been terrifying at times. But it actually took little effort to fall in love with the country and the people. You see, despite the negative press, Russians have a wonderful gift of looking beyond the kind of superficial nonsense that usually dominates the English acting profession. They make a big virtue of your "soul", and are at times able to say something outrageously positive. They might say "you have big heart, Jethro", or "you are full of love". An Englishman would never have the courage to say such a bold, romantic statement.

I eventually decided for myself that Moscow is the real home of rock-and-roll. It's obvious people are living their own lives pretty much how they want to. The nearest city I could compare it to is New York in terms of its money, size, speed and chaos. But Moscow lacks the micro-management problems you in the Western world. It's truly one of the freest places I've been to.

It's unusual for an English actor, sure, but I think my professional future will be in large part in Russia. I've already had leading producers come to me with exciting offers on two films. I wouldn't have a problem working in Russia, although it may be a big ask for my family to move to Moscow. Deep down, I'm a country boy and was intending to move away from London once my baby daughter reached school age. But, who knows, maybe twenty years from now you'll be finding me in Russia, in a country house set deep in some obscure Russian province.

Way to the East

Jethro Skinner was a struggling English actor until he got a invitation from Russian director Oksana Bichkova to appear in her next movie. Without knowing too much of what awaited him, Skinner travelled in Moscow, and forty days later emerged a local film star. In June, the film was presented at the prestigious Kinotavr Russian film festival, bringing up one last surprise for Skinner - the historic decision to award him, a foreigner, the prize for best acting performance.

In Oksana Bychkova's film "Plus One", Jethro Skinner plays Tom Greenwood, a famous British puppet show producer, who comes to Moscow to scout for new talent. His interpreter Masha is an introverted young woman who does not speak to people unless she has to. Initially the Englishman strikes Masha as an unpleasant type: too loose-mannered, the opposite of Masha, who is quiet and modest. But Tom's enthusiasm for his work grows on her, and so does he.

Plyus odin (`Plus One'), directed by Oksana Bichkova, will be released in Russia on August 31. International release dates have yet to be confirmed.