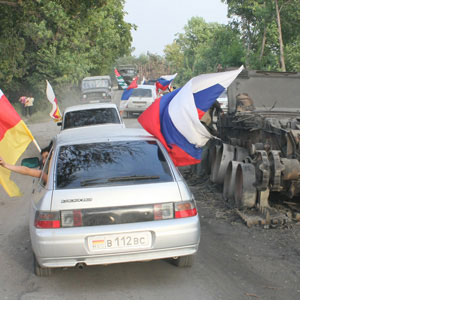 Seven of the world's leading industrialized nations have condemned Russia's decision to recognize Georgia's breakaway republics as independent, while calling on Moscow to withdraw its troops from Georgia.

"We, the Foreign Ministers of Canada, France, Germany, Italy, Japan, the United States and the United Kingdom, condemn the action of our fellow G8 member," the statement, released by the U.S. State Department on Wednesday, said.

"We deplore Russia's excessive use of military force in Georgia and its continued occupation of parts of Georgia. We call unanimously on the Russian government to implement in full the six point peace plan brokered by [French] President [Nicolas] Sarkozy on behalf of the EU, in particular to withdraw its forces behind the pre-conflict lines."

Russia insists that it is in full compliance with the six-point peace deal, which allowed Russia to take extra security measures to prevent further violence. Three weeks on from the conflict, Russia maintains peacekeepers in a 'buffer zone' between Abkhazia and South Ossetia.

The ceasefire deal, signed by Russian President Medvedev, made no mention of Georgia's territorial integrity. Moscow has said Georgia lost its right to Abkhazia and South Ossetia when it launched its ground and air offensive against South Ossetia's capital, killing large numbers of civilians, mainly Russian nationals.

The Western diplomats' statement said Russia's recognition of the provinces "violates the territorial integrity and sovereignty of Georgia and is contrary to UN Security Council Resolutions supported by Russia."

The current standoff, in which ties between NATO and Russia have been frozen, has sparked media speculation that the seven leading industrial powers could oust Russia from the Group of Eight. However, the statement avoided any hint of such a move, and British Foreign Minister David Miliband stressed on Wednesday that there were no such plans.

More articles on this topic:
The West should be guided by facts
Gorbachev: Russia had no choice in S.Ossetia
SCO supports Russia's role in S. Ossetia
South Ossetia and Abkhazia mark first step to sovereignty
Kosovo refuses to back sovereignty for South Ossetia, Abkhazia