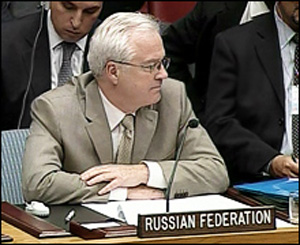 The UN Security Council has double standards over Abkhazia and South Ossetia's independence, according to Russia's Ambassador to the UN Vitaly Churkin. Members of the Council don't understand the essence of the conflicts in the Caucasus, he said.

The comments were made when the UN Security Council convened to discuss Russia's recognition of statehood for Abkhazia and South Ossetia.

The meeting, called at the request of Georgia, saw a barrage of criticism over Moscow's actions.

"Russia violated the security zone patrolled by UN peacekeeping forces deployed by the UN Security Council," said Alejandro Daniel Wolff, U.S. Representative to the UN. "In Abkhazia, Russia is violating not only the territorial integrity of Georgia, but also the integrity of this Council."

Russia's support for the independence of the two republics was officially put on record at the UN as Vitaly Churkin read out President Medvedev's decrees. He also said the discussions could not be complete without listening to representatives of Abkhazia and South Ossetia.

"We believe the Russian side should be delivered a very strong message," he said. "Otherwise it would mean that the foreign-sponsored groups around the world can use violence and ethnic cleansing and be rewarded with independence."

But Churkin said the international community had failed to act when Georgia launched an invasion into South Ossetia, even accusing some members of fueling the conflict.

"The U.S. and some European states promised Mr Saakashvili NATO's protection and have started supplying him with new weapons. It obviously invites fresh provocations," Churkin said.

He also said that Moscow had called for a ceasefire in the early hours of the conflict but got no support.

When the U.S. argued that Russian troops should never have entered a sovereign state, Moscow's Ambassador referred back to the Iraq war, attacking America's precarious position on the moral high ground.

"I would like to ask the distinguished representative of the United States....Weapons of Mass Destruction. Have you found them in Iraq yet or are you still looking for them?" Churkin said.

So, the meeting ended with the Security Council no closer to finding a way forward in the dispute.