Seumas Milne, The Guardian: The West needs Russian help over the Middle East issues like Iran and Afghanistan 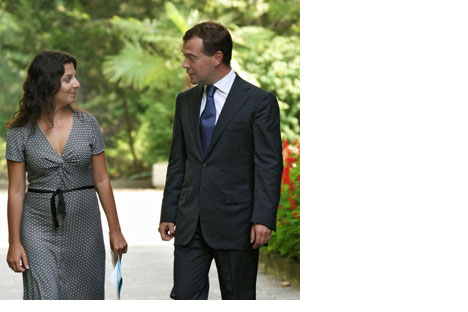 Seumas Milne, associate editor of British newspaper 'The Guardian' in an exclusive interview to Russia Today discusses the impact of the Georgian-South Ossetian conflict.

You can watch it online.

RT: In an article you wrote recently, you described Georgia as the graveyard of America's unipolar world. What did you mean by this?

SM: For the last 17 years, since George Bush's father announced the creation of a new world order, the United States has effectively had no international competitor in terms of strategic and military power. It's been able to impose its will unilaterally across the world - and that's what's sometimes been described as unipolar world. And I think what's happened in the last few weeks in Georgia and the Caucasus marks, really, the end of that period - where, for the first time, a major regional power, which is what Russia is now, has been prepared to stand up to the United States and its will in the area.

RT: You say it seems Russia has issued a major challenge to U.S. domination of the world - so what global impact do you think it's had so far and what will it have in the future?

SM: I mean, the United States has been pushing NATO on to Russian borders into the former territories of the Soviet Union and Russia has effectively drawn a red line and called a halt to that. The impact of that is being felt all over the world. For many parts of the world the fact that there has been only one dominant superpower throughout this last period has effectively reduced their freedom of action. And I think many people welcome the prospect of at least some counterweight to American and Western power in the world.

RT: The term a new cold war has been used a lot recently. Do you agree with that term and do you see the international community isolating Russia as a punishment?

SM: Already we've seen that there's been a beginning of a shift of alliances and arrangements in different parts of the world - notably in the Middle East, where there's been talks between Syria and Russia about new arms deals. And that certainly affects the relationships in the region. But I think it's going to go much more widely than that. It will become clear to people from these events, in different parts of the world - and it already has done - that America is not able to project its power everywhere, that there are limits to American power. This is the first time in terms of States that's happened.

RT: Now the Georgian- Ossetian conflict has been so controversially covered by different media on both sides, what do you make of the media coverage? Has it been an information war?

SM: Of course, up to now, the United States has been resisted militarily by irregular forces in countries it's occupied, like Iraq and Afghanistan. But this is something different. A major power like Russia for the first time really standing up to the United States power. It's already having an influence. I think it'll start to make people reassess relationships all over the world - from Latin America to Central Asia. I think the idea about a new Cold War, which is being mooted for some months if not longer, is a bit overdone. I mean a Cold War was a confrontation over 40 years between two global powers - the Soviet Union and the United States and their allies - which had a strong ideological as well as military dimension to it. And we are not talking about that here. Russia is not projecting itself as a global power in the same way, although the United States is. I think it's clear that there are going to be much greater tensions as there already have been. It's unlikely that this conflict over the Caucasus is the end of the story by any means. So, I think it's true that there are going to be greater tensions and the possibility of other conflicts. As to the isolation of Russia, I think there is a lot of saber-rattling and sort of attempt to make shows of force like it's happening in the Black Sea at the moment. But I think Russia has a lot of cards in this conflict in terms of its relationship with Europe, in terms of energy supplies. The West needs Russian help over issues in the Middle East like Iran, Afghanistan. It's not going to lightly throw those things away. There are strong commercial and economic relationships. I am sure there will be some comeback and some attempt to some at least nominal sanctions. But I think it's hard to see there being a real deep freeze in diplomatic relations over this issue.