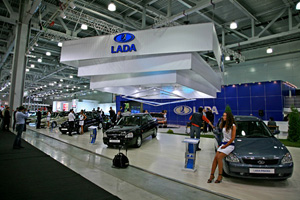 Today, Russia is able to create favorable conditions for organizing such big events, where automobiles manufacturers can present their wares to a public that has the disposable to do more than just gawk.

In compliance with international standards, the first two days of the Salon were reserved for the media only, which gave leading automakers an opportunity to hold press conferences to familiarize the press with their products. But starting on August 29th and rolling on until September 7th, amateurs car enthusiasts are welcome to come and see the latest design marvels of the car market at the Crocus Expo International Exhibition Centre.

During the press conferences of world-known brands all the automakers mentioned the rapid growth of Russia's car market, which is expected to become the 5th world market very soon (after the US, China, Japan and Germany). With little tire tracks, Russia has been gaining these positions; today it is one of the most important markets in the East. And as the car manufacturers know, Russia may rank first in Europe in car sales this year. Thus, all the global brands have made themselves known here. That is the reason why Moscow was chosen to premiere a nice collection of new car models the world over.

BMW made an impact with the presentation of its new X5 Security. This car, coupled with the best security technology, provides all the benefits of a sports utility vehicle. For the first time in Russia, BMW offers an elegant CS Concept - a luxury sport car. By the way, this popular car brand now stresses the importance of environment protection. This tendency comes from Europe, but has become popular here. BMW aims to reduce the amount of fuel consumption, instead of following the `small cars vs. big cars' principle.

The nicest presentation was for the new Mazda Kazamai, which means `swirling crosswinds' in Japanese. The debut of stylish and compact managed to somehow unite cultures under the roof of the Crocus Expo: the choir of Moscow military district sang, young and dynamic dancers twirled their batons. The show was full of energy, as is Mazda's latest model.

As mentioned, Russia's market provides great business opportunities. Ironically, every brand proclaimed to be "number one" in the Russian car market. But that is simply explained by the rapid growth of their sales in Russia. For example, in 10 short years BMW's sales volume grew more than 20 times; output is 33 percent up on last year. The same for Volvo: in 2007 they sold 21,000 automobiles to Russian clients, a 95 percent increase on the year before.

A growing market means the opening of new car dealerships, but the expansion isn't limited just to Moscow. Car companies plan to expand their dealer network across Russia. BMW, for example, will have 59 dealerships in 43 Russian cities by the end of this year.

Porsche has invested 17 million euros (6 trillion rubles) in customer service improvements. Even though 40 percent of their sales occur in Moscow, they have dealer centers in Stavropole and Saint Petersburg, and strong dealer competition in Kaliningrad, Voronezh and Krasnoyarsk.

Land Rover, with seven years on the Russian market, will also feature high. Since 2001, volume sales grew by 30 times, a nice present as the brand celebrates its 60th anniversary this year.

Commenting on dealer expansion plans, a Land Rover spokesperson said: "We invest lots of money in our dealer network development. The main goal is to give them premium looks and to meet the high standards of our company. As for our expansion - we have ambitious plans to grow in Russia."

The exhibit space of auto show contains more than 120,000 square meters - more than any other Russian motor show. The high status of the event is also stressed by the number of participants - over 1,000, with more than 60 automobile brands on display.

The Salon is expected to attract up to 2 million visitors in a little over one week, which, if true, will make it the biggest such event in the world. Russia is a great market today, with wonderful perspectives. The only question remains: while the market lets in such a number of big investments, are the Russian roads ready to handle such sales growth?