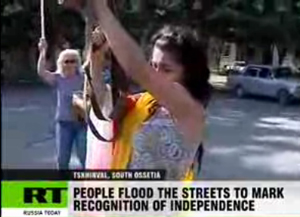 Prime Minister Vladimir Putin on Thursday accused the United States of orchestrating the military conflict in Georgia in order to boost the chances of a U.S. presidential candidate.

In an interview that was to air on CNN late Thursday, Putin said Washington had encouraged Tbilisi to attack South Ossetia to give one presidential candidate an edge in the hotly contested U.S. election, CNN said on its web site.

Republican John McCain, a weathered foreign policy hawk and a staunch critic of Russia, is in a neck-and-neck race with Democrat Barack Obama for the White House.

Putin did not specify a candidate. Reached by telephone, Putin's spokesman Dmitry Peskov declined to say which one he was referring to.

McCain is an ally of outgoing U.S. President George W. Bush. Following Russia's invasion of Georgia, McCain lashed out at Russia, calling on the Bush administration to pull out from a joint space exploration project with Russia and repeating a demand that Russia be kicked out of the Group of Eight.

The White House press office had no immediate comment on Putin's statement.

At the onset of the conflict with Georgia earlier this month, Sergei Markov, a Kremlin-connected spin doctor and United Russia deputy in the State Duma, described the escalation as a strategy by U.S. neo-cons to boost McCain's popularity. In televised comments, Markov accused U.S. Vice President Dick Cheney of masterminding the strategy. Cheney will visit Georgia next week.

Speaking at the Black Sea resort of Sochi, Putin told CNN that Russia had to send its troops into South Ossetia to rebuff Georgian forces in order to avert a humanitarian catastrophe.

He also rebuked the U.S. administration for not having done more to stop Georgia's attack early Aug. 8. Led by U.S.-educated President Mikheil Saakashvili, Georgia is the most enthusiastic U.S. ally among the former Soviet republics.

"In the interview with CNN, there were lots of tough but truthful comments," Peskov said. "But in the interview, you also can see a desire and readiness to cooperate with all countries."

Putin has stepped into U.S. elections before. In June 2004, when Bush was struggling for re-election amid criticism for going to war with Iraq without just cause, then-President Vladimir Putin announced that Russian secret services had obtained information that Iraq had weapons of mass destruction. Putin's announcement appeared to stun the White House, and analysts at the time dismissed it as a clumsy attempt by Putin to help Bush win re-election.

Separately Thursday, Putin announced that 19 U.S. poultry companies would be banned from exporting to Russia after Russian health and agriculture officials randomly tested their products and discovered they were full of antibiotics and arsenic, CNN reported.

The ban is unrelated to the Georgia conflict, Putin said.