How to win gold medals...it's all a matter of money 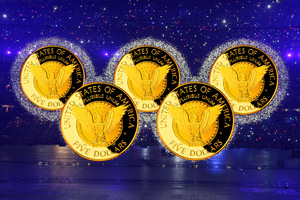 Businessmen - particularly Lord Northcliffe - were the first to realise that sport could be a business. At the beginning of the 20th century, the owner of the Daily Mail was fascinated by the aviation pioneers, and offered £1,000 to the first person to fly across the English Channel. On July 25, 1909, a heavier-than-air flying machine, a Bleriot XI, crossed the Channel for the first time, piloted by Louis Bleriot.

A successful marriage of sport and business was created. Daily Mail circulation shot up, Northcliffe made money and Bleriot won glory.

The next to catch on to the need to treat sport as an industry were statesmen. During the 1920s and 1930s, sport became a matter of government concern in many countries and a front in ideological warfare. "Of course, every single Olympic gold medal is a combination of talent and hard work," says Simon Chadwick, a sports management specialist. "But the system for winning top prizes is an industry." The richer the country, the better the coaches it can hire and the better the sports facilities it can offer. No wonder the USSR and the US dominated for decades.

In the Soviet Union, the people lived poorly, but the state could decide how to distribute its finances. What it gave to sports was huge by any standards.

The link between the amount of money spent and the number of medals won is obvious, writes Ken Hogan, who has studied investments in Australia's Olympic movement over several decades. In constant prices, in 1976 the cost of training the national Olympic squad was $1.2m and the number of medals won could be counted on the fingers of one hand; 20 years later, the outlay was $106m for more than 40 medals, including nine golds. In 2004, financing almost doubled and the number of medals reached 49, including 17 golds. Hogan calculated that, 20 years ago, any Olympic medal cost Australia $8m ,and a gold $37m. But by the time of the Athens Olympics, a sports "infrastructure" had been put in place and the tradition was already strong: as a result, the cost of one gold dropped to $11m. That was also what a gold cost the US at Athens. For Russia, gold medals came five times cheaper. Why the difference?

First, the purchasing power of money is greater in Russia: that is, $1m in Russia can buy more than $1m in the US. Second, Russia is a part of the former socialist world. In a study forecasting Olympic results, PricewaterhouseCoopers identified three key factors affecting the results of every country: its GDP, the size of population and if it was in the ex-Soviet bloc. "Sport in these countries was politically significant and received huge investments. It will take some time for the effect to wear off," the report noted. In the USSR, all sport was government-financed, while in the US it was financed by the private sector. In post-Soviet Russia, there was no financing from either the government or the private sector for a long time.

Today, Russia is experiencing a genuine sports "boom". The Russian footballers' Euro 2008 bronze was like a starting pistol for the beginning of a long-distance race, turning sport (especially football) into a fully-fledged, profitable business. The Football Federation, jointly with the National Football Academy, created by Roman Abramovich, launched a $100m programme to develop football. Even so, financing of sports in Russia has once again become the prerogative of the state. "If you take our sports as a whole, the ratio between government and private financing is 80:20," says Gennady Shvets of the Russian Olympic Committee. He notes that sponsorship money has, at best, remained at the same level as before, mainly because the government has been spending more.

The sponsors are often government entities. The biggest are Gazprom and Russian Railways. However, sport drives business: companies have been springing up in Russia which specialise in building sports facilities and producing sporting equipment. It is turning out to be a lucrative business as there is now considerable money splashing around in sport.

"For the sake of comparison, the government budget earmarked 1bn roubles ($42.5m) for sports in 2000 compared with 17bn ($722.5m) today," says Vladislav Tretyak, a former ice hockey goalkeeper and now head of the Hockey Federation.

There is an undeclared race between the country's regions to build more sporting facilities. In the last couple of years, sports facilities have been appearing in small towns and villages surrounding major Russian cities. These are not confined to gyms and fitness centres. Golf clubs are being set up and golf links are opening. By 2010, there will be at least 20 of them in Russia. Outside Moscow the new trend is to set up horse-racing clubs with race tracks, training equipment, modern stables and solariums for horses. There are already at least 50 tracks.

On balance, little has changed since Soviet times, except that some athletes have been making a lot more money since petrodollars started flowing into the country. A Russian athlete who won a gold at Athens was paid $50,000 out of the budget, a silver won $20,000 and a bronze $10,000, not to speak of gifts such as a Lexus SUV. Medals at the Beijing Olympics will cost three times more; ie, a gold will bring its winner 100,000 euros (nothing has yet been announced about off-road vehicles). "Between 800m and 1,000m roubles ($34m-$42.5m) is annually paid in grants to Russian Olympic athletes," says Alexander Katushev, MD of the Russian Olympic Athletes Fund, whose patrons include Abramovich, Vagit Alekperov, Oleg Deripaska and other famous businessmen. "We provide monthly payments to current prizewinners, coaches and retired prizewinners."

However, "when a country's sport is sufficiently well developed, simply throwing more money at it does not bring significant results," says Chadwick. "The approach works only at the initial stage, which is why it is yielding such good results in China." China has recently increased its spending on sport to 1pc of GDP (against Russia's 0.25pc) and the members of the national team have been paid a "salary" equivalent to $700 (in 1991, members of the Chinese Olympic team were paid $12 a month). As a result, China is snapping at America's heels in terms of the medal count. In countries with a strong sporting tradition, just pumping money into sports does not help.

But one should take note of the British method: money is distributed between different sports based on their performance in the previous Olympics. For example, the track and field athletes, who won four gold medals at the previous Games (they'd hoped for five or seven) got £1m less for training for Beijing than last time, and the gymnasts, who failed to win a single medal, will get a mere £1.4m versus £3.6m in 2004.

That will make it possible to increase the funding of those sports in which Britain performed at least as well as expected. It is an effective approach because the financing of the national team has hardly increased, considering inflation, while the number of medals has grown. In 1996, Britain won one gold, nine in 2004, and 19 in Beijing.