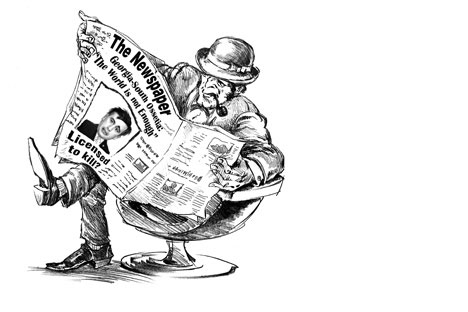 It started on the night of August 7 with the Georgian invasion of South Ossetia. By the weekend the story was of massive Russian retaliation. And as the tanks rolled into Tskhinvali and Gori (birthplace of Stalin, as many newspapers reminded us), so the headlines rolled out: "Putin's revenge", "Wrath of the Russian bear", "Russia turns might of war machine on rebel neighbour", "Russia's self-aggrandisement". Behind the headlines, as if they needed expanding, the message was clear: here was the big Russian bully taking a sledgehammer to smash the plucky little nut that was Georgia.

It soon became apparent - through the British media - that Georgia's President, Mikheil Saakashvili, with his US-armed and Israeli-trained armed forces, had been a foolhardy, and criticism of his action was abundant. As was the slating of America, Nato and the EU in the handling of the build-up to South Ossetia (although Nicolas Sarkozy, representing the EU, did .

But this, it seems, is not what Russia sees. Instead, it perceives a hostile British press stirring up anti-Russian feeling with cheap imagery, inaccurate, or at least inadequate, reporting and toxic commentary. On the surface, this view has some weight, but not once you cut below the surface, and really not that far below. For one, the story immediately before the misguided Georgian attempt to reclaim (or claim, some would argue) control of South Ossetia has been extensively covered: of Abkhazia and South Ossetia's automatic inclusion in the republic of Georgia after the break-up of the Soviet empire; of those two region's disquiet with being part of the Georgian domain; of the war 15 years ago between Abkhazia and Georgia, which the tiny region won thanks to massive Russian assistance; of the friction between South Ossetia and Georgia (and, indeed, Abkhazia and Georgia) which has been a constant feature of this landscape.

Meanwhile, it hasn't taken much intensive reading to see that the US-supported Georgia with a President who studied in America, was playing for bigger stakes than just the claiming of South Ossetia, what with Nato and EU membership both on its agenda.

And around these were bigger stakes still. In the New Statesman, one writer remarked "... the Georgian fiasco has implications for politics in the Middle East, the European Union and the United States. For the Bush administration (or its hawks at least) the Georgian mistake presents an opportunity - let us recast Russia and a threat to global stability and a potential enemy." And later talks of the West being driven towards a rift with Russia which "will polarize a number of other issues, including policy towards Iran. On this latter matter, Russia has played a relatively constructive and, perhaps more importantly, a moderating role." Other commentators, not without experience of the region, have addressed what the future implications of the conflict will be. In the Observer a commentator writes: "It's time the West stopped talking about `Georgian territorial integrity', and about South Ossetia and Abkhazia as `breakaway regions of Georgia', as if their `illegal secession' can somehow be reversed. It cannot."

Elsewhere, we have read about claims of atrocities (by both sides), of Chechen and "Cossack" militias brutalizing and killing civilians, of 2,000 or more dead. These have all been reported, but skeptically, and only so because confirmation has been hard to come by. No doubt, at some time soon, more will be known and the British press will report it as fact. There seems to be a perception of an anti-Russian bias in the British press. If there is a bias, perhaps it lies at a higher level. While it's true that Russia has come in for a bit of a battering - particularly for its tardiness in leaving Georgia - just as much under the hammer has been Nato and the Bush administration. Russia, as ever, has been losing the PR war. Russia must learn not to encourage enmity, rather to make friends of those who want to be friends, even while keeping its own interests paramount. -

The author is a media researcher and journalist based in the UK and France.