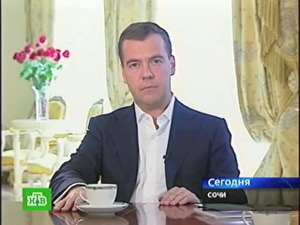 Channel One: Mister President, events in South Ossetia and Abkhazia have been unfolding for 17 long years now. Why was the decision to recognise these territories' independence taken when Georgia attacked Tskhinvali? Were there other options possible?

MEDVEDEV: I think this decision was inevitable in the given situation, and that it has been effective is clear to all now. We really did try throughout these 17 years to hold together a state that was in effect coming apart, and we encouraged all possible settlement efforts. Our peacekeepers were on duty day and night, helping to keep conflict at bay. We prevented large-scale bloodshed in the 1990s. There would probably have been continued chances for achieving a settlement were it not for this idiotic adventure launched by the Georgian leadership, which effectively put an end to hopes that Abkhazians, Ossetians and Georgians could live together. Not only did it put an end to these hopes but it caused a great number of deaths. Civilians, our citizens among them, lost their lives. Peacekeepers, who were trying to keep the conflicting parties apart, lost their lives. That Georgian peacekeepers opened fire on their own colleagues is especially monstrous. All of these things ultimately led to events taking this most dramatic and serious turn. We were left with no choice but to respond to this absolutely insolent and brazen attack, return things to normal and protect the lives and dignity of South Ossetia's people. A separate plan to attack Abkhazia had been prepared. Our General Staff made it public just recently. This plan followed the same scenario. We therefore made our decisions in order to prevent any future genocide and exodus of Abkhazians and Ossetians from their territories. As I said, events have shown that these decisions were evident and necessary.

NTV channel: Our Western partners have responded to Russia's decision as was to be expected, with moderate to very sharp criticism. What kind of reaction can we expect from our closest neighbours, from the CIS countries, for example? How important for Russia is it to have other countries follow our example and recognise Abkhazia and South Ossetia? How much influence will this have in determining our next steps?

MEVEDEV: Russia has already taken all the main steps that were necessary in this situation. As you should realise, this was not an easy decision, but it was necessary. Reactions in other countries have indeed varied, and this was probably to be expected. Our closest neighbours have been completely objective in their reaction. I met with most of these countries' leaders at the Shanghai Cooperation Organisation summit. They understand the motivations for the decisions Russia has taken.

Recognition is a separate issue. I want to remind you that each country makes its own individual decision on recognition. There is no collective action in this situation. Take the example of Kosovo. It is clear that in this situation some countries will agree to emergence of new states, while others will consider their emergence untimely. But according to international law, a new state becomes a subject of law, as the lawyers say, from the moment it gains recognition from at least one other country.

From a legal point of view these new states have come into existence now. The process of their gaining recognition might be a long one, but this will not affect our position. We have made our decision and it is irreversible. Our duty is to ensure peace and calm in the region, and this is the basis for our position.

Rossia channel: What steps will Russia take now in these republics? What form will Russia's plans take?

MEDVEDEV: We will help these republics in every way we can of course. Work is underway on drafting agreements, already international agreements now, between our countries: between the Russian Federation and Abkhazia, and between the Russian Federation and South Ossetia. These agreements will set out our obligations regarding all forms of support and aid: economic, social and humanitarian aid in the broad sense of the word, and military assistance. We will establish normal full-fledged relations under international law with these republics and build relations as allies with them.

Rossia channel: Everyone realises now that Russia's place in the world has undergone serious change since the events of August 8. The whole previous system of agreements is changing dramatically before our very eyes. A number of international institutions have already demonstrated their total ineffectiveness in resolving this conflict. But Russia and the West are not ready, as I understand it, to completely break off relations. How do you see the world's future, the future world order, and Russia's place in it?

MEDVEDEV: I will make five principles the foundation for my work in carrying out Russia's foreign policy.

Second, the world should be multi-polar. A single-pole world is unacceptable. Domination is something we cannot allow. We cannot accept a world order in which one country makes all the decisions, even as serious and influential a country as the United States of America. Such a world is unstable and threatened by conflict.

Third, Russia does not want confrontation with any other country. Russia has no intention of isolating itself. We will develop friendly relations with Europe, the United States, and other countries, as much as is possible.

Fourth, protecting the lives and dignity of our citizens, wherever they may be, is an unquestionable priority for our country. Our foreign policy decisions will be based on this need. We will also protect the interests of our business community abroad. It should be clear to all that we will respond to any aggressive acts committed against us.

Finally, fifth, as is the case of other countries, there are regions in which Russia has privileged interests. These regions are home to countries with which we share special historical relations and are bound together as friends and good neighbours. We will pay particular attention to our work in these regions and build friendly ties with these countries, our close neighbours. These are the principles I will follow in carrying out our foreign policy.

As for the future, it depends not only on us but also on our friends and partners in the international community. They have a choice.

Channel One: Are the priority regions the territories that border Russia?

MEDVEDEV: The countries on our borders are priorities, of course, but our priorities do not end there.

NTV channel: Mister President, you said that Russia would respond to any act of aggression committed against it. Do you think our laws give sufficient power to do this? Is this written into our laws?

MEDVEDEV: Everything has long since been done. The international community has approved the UN Charter, which states countries' right to self-defence. We have the Constitution and we have special Russian laws on which we base decisions on counter-measures, including the use of Russia's Armed Forces. The legal framework is in place and working, and there is no need for adjustments.

Channel One: What about diplomatic and economic sanctions?

MEDVEDEV: We are not in favour of sanctions in general and they are something we consider only in extreme cases. But, like other countries, we are sometimes forced to resort to sanctions. A number of countries have special laws regulating the imposition of sanctions, and if needed, we could also adopt similar special laws, but I think this is the most unproductive road.