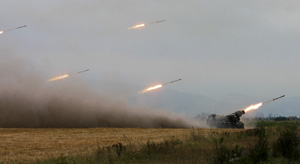 Prime Minister Vladimir Putin rejected suggestions that Russia may target pro-Western Ukraine after recognizing Georgia's breakaway regions. Russia has ``long recognized'' Ukraine's borders, Putin said yesterday in an interview with Germany's ARD television. He also said Russia will honor its oil- and gas-export contracts, and he repeated criticism of U.S. involvement in Georgia. The Crimea in southern Ukraine on the Black Sea, with its Russian-speaking population and a Russian naval base, ``is not a disputed territory,'' and didn't have an ethnic conflict, as South Ossetia had, the former Russian president said. His comments were posted on the Russian government's Web site.
French Foreign Minister Bernard Kouchner said Aug. 28 he assumes that Ukraine and Moldova are the next ``Russian targets'' after the Kremlin recognized the independence of Georgian breakaway regions South Ossetia and Abkhazia. Ukraine, like Georgia, has allied with the West and is seeking to join the North Atlantic Treaty Organization. The U.S. has long seen Georgia and Ukraine as counterweights to Russia's influence in the region. Problems among Tatar, Ukrainian and Russian populations in the Crimea are an internal issue for the Ukraine, Putin said. Russia will honor its agreement with the Ukraine that allows Russia's Black Sea fleet to remain in the Crimea until 2017, he said, offering reassurance Russian navy will eventually leave.

Export Obligations
Putin said Russia remains ``a very reliable partner'' and will honor its export obligations. Russian oil companies were ordered by the government to cut supplies to Germany and Poland through the Druzhba pipeline and executives from OAO Lukoil were put on alert for the weekend, the London-based Daily Telegraph reported yesterday, citing an unidentified business person. The cut may come as early as Sept. 1, the newspaper said. ``We hope that our partners will honor their obligations as well as we do, and intend to do in the future,'' Putin said, referring to Russian oil, gas, timber, metals and fertilizer exports. Russia ``guarantees'' that Germany will get its 40 billion cubic meters of gas this year, he said. Yet, ``if someone wants to break these ties, we can't do anything about it,'' he said. ``We don't want it.''

South Ossetia
Russia's decision to unilaterally recognize the independence of South Ossetia and Abkhazia on Aug. 26 drew condemnation from world leaders, with President George W. Bush asking Russian President Dmitry Medvedev to ``reconsider this irresponsible'' decision. Medvedev called his decision on the breakaway regions an ``obvious'' move to protect his country's borders. ``There is no difference'' between Kosovo, which the European Union recognized on the order from the U.S., and South Ossetia and Abkhazia cases, Putin said. If EU recognized Kosovo, it should then recognize Georgia's breakaway regions, he said. ``If European countries continue this policy, we will soon have to talk about European issues with Washington,'' he said. EU should stop ``serving'' the U.S. foreign policy interests, as this won't bring any benefits for its member countries, Putin said. European governments should send more observers to the security zone and `` set up impartial monitoring of the acts of the current Georgian government,'' Medvedev said today in a telephone conversation with U.K. Prime Minister Gordon Brown, according to an e-mailed statement from the Kremlin.

War Zone
Putin repeated his accusations in an Aug. 28 interview with CNN that the U.S. orchestrated Georgia's attack on South Ossetia to benefit a presidential candidate. The U.S. allowed its instructors, which were training Georgian army to use the new arms, into the war zone, suggesting the U.S. were aware and even involved in Georgia's plan to attack South Ossetia. This was done to ``organize a small victorious war,'' he said. ``And if that failed, they wanted to create an enemy out of Russia and unite voters around one of the presidential candidates,'' Putin said. ``Of course it's the candidate of the ruling party, because only the ruling party would have such an administrative resource.''