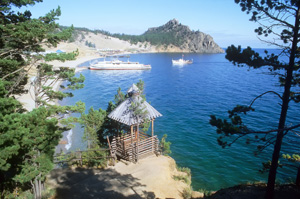 Locals call it the "Pearl of Siberia," and its riches are increasingly being discovered by the outside world. Today, Lake Baikal remains both timeless and a victim of civilization.

Nestled in the deep south of Siberia, far away from more "conventional" tourist destinations, Lake Baikal - "rich lake" in the tongue of locals - amazes visitors with over 12,000 square miles of natural charm and unique landscapes. Only here can one find dozens of native species of flora and fauna, including the earless Baikal Seal and the delicious Omul fish, which has found its place in local cuisine.

Baikal has become famous for holding one-fifth of the worldґs freshwater reserves and for being the worldґs deepest lake, at 5,315 feet. It earned a spot on UNESCOґs World Heritage Site list in 1996 and has become the target of numerous scientific expeditions. This attention has resulted in a steadily growing stream of tourists, which some locals fear will eventually wipe out Baikalґs appeal to those seeking true wilderness.

Today, the peak tourist season occurs between June 15 and August 15, offering visitors ideal conditions for trekking, biking, camping, kayaking and fishing. A favorite is the traditional "banya," a Russian-style sauna with an entire culture of its own. In winter, hard-boiled tourists enjoy dog sledding and ice fishing on the lake, which freezes over completely.

Some tourists make Lake Baikal only one of several stops along the Trans-Siberian Railway, hopping off at the regional capital of Irkutsk. From there, many choose the increasingly developed and comfortable village of Listviyanka (located 40 miles from Irkutsk), where one often runs into Japanese and European guests.

One area that has remained genuinely wild is Olkhon Island, located almost 200 miles north of the local capital. Olkhon is the largest of 27 islands on the lake and is accessible via special taxi or bus from Irkutsk. The roads leave much to be desired, making for a half-day journey that is complete only after a ferry ride to the islandґs largest village, Khuzhir.

Those who venture to Olkhon, however, never regret making the trip. Time seems to hold its breath on the island, protecting its 1,500 inhabitants from the busy and stressful life that creeping civilization may one day bring. Electricity only reached its three villages in 2005.

"Typical" Siberians are considered different from other Russians because of their exposure to natureґs elements. They pride themselves on living in harmony with nature, respecting personal strength and tradition. Because of its location, Olkhon is the perfect place to meet such people, as well as longtime Asian Buryat inhabitants.

Local Buryats worship the Shamanka rock (located on Olkhonґs Western shore), one of many areas around Baikal believed to be sacred. Tourists are advised to respect local beliefs and refrain from taking photographs of shaman or damaging their holy artifacts (usually special markings on trees and holy sacrifices of clothing or coins).

Olkhon offers visitors a diverse landscape: steep mountains populate its eastern shore, while, in other places, tourists discover forests, steppes and even a small desert. It is not, however, void of any and all accommodations: a plethora of hostels welcome tourists from all parts of the world, and the island now has a museum, playgrounds for children, a library with materials in English and German and even a small petting zoo. The most famous hostel - by far - is Nikitaґs Homestead, run by island resident and conservationist Nikita Bencharov.

Given the stereotypical picture of Russian lifestyle, where guests are welcomed with limitless vodka, Bencharov presents a different approach: binge drinking is neither welcomed nor supported. Instead, he offers visitors delicious Siberian cuisine, abundant in both portions and variety.

Visitors familiar with Moscow are amazed at local prices: for 750 rubles (about $30) one is presented with a traditional Siberian cabin and three buffet-style meals served throughout the day. If you chose to go on one of Nikitaґs numerous tours on the island, the innkeepers will pack a generous lunch for you.

Increased tourism has put a strain on local resources, especially accommodations. So far, Bencharov has been able to skirt the problem by referring "excess" guests to neighbors. However, nobody is sure if tourists will one day overwhelm the island and make such hospitality a relic of history.

As if the ancient legends were true, Lake Baikal still captivates people from all over the world with its spirit. Many visitors who only desire to see the Lake once end up returning again and again, a sign that something about this mystical place will remain eternal.

2. It is one of the most popular adventure tours destination: from trekking and biking, to swimming, jeeping, rafting, horse-riding, fishing, and staying on the shore of the lake in comfortable yurts or rented tents etc.

3. It is both a Buddhism and Shamanism centre in Russia. Hundreds tourists are coming in order to see ritual dances of Siberian shamans or to relax in meditation in a Buddhist monastery.

4.On the way to Baikal you can to see all the advantages and developments of Siberian region.

5. In 1996 Baikal was added to the World Heritage list by Unesco, and in 2008 the lake was chosen as nominee for New Seven Wonders of Nature.