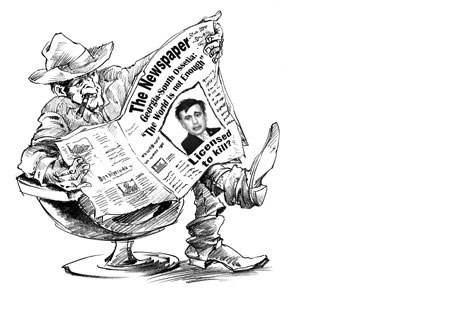 In the film "The World is not Enough," Agent James Bond goes to Georgia to defend an oil pipeline to the West. Today, according to the Western press, Russia is "invading" Georgia to cut off our oil supplies. The "imperial designs" of a Russia emboldened by windfall oil profits was the story line in almost every London, New York and Washington newspaper.

I couldn't believe how many British and American commentators wrote ludicrous analyses, setting aside all lessons from their reporting on the Iraq War. It's truly amazing how easily the media can do away with all objectivity, never letting such trivialities as truth and facts get in the way.

Georgian President Mikheil Saakashvili hoodwinked a vast majority of the Western press with his theatrics, portraying his country as a helpless and innocent democracy being mauled by the Russians.

TV reports showed houses burning and long columns of tanks amid reports of a Russian assault without ever identifying that they were Georgian military columns attacking South Ossetia. They didn't bother to mention that the burning houses were lit by Georgian troops. No media cared to identify that first blood was drawn by the Georgians, who pummeled the capital of South Ossetia into submission with overwhelming force in less than a day.

When Russian President Dmitry Medvedev stated that "the information ... attests to the fact that crimes of the most serious kind were committed: people were murdered, burnt, crushed by tanks and had their throats cut," it was reported as a footnote under the feverish exaggerations of Saakashvili.

Instead of investigating Russian claims of genocide against Saakashvili, the media invited former a British ambassador to Georgia to say: "In recent years and months the Russians have increased their support for the separatists, including issuing Russian passports." There it is, the logic of it - Georgia sent tanks in the middle of the night to kill civilians because the Russians issued passports to South Ossetians.

London's press was getting Freudian: Russia was reacting because of "wounded pride," and its response was "disproportionate." How would the U.S. respond if Cuba invaded Panama, armed with Russian weapons? What was the U.S. response to much less threatening situations in Grenada, Panama and Iraq? For years, the United States has encouraged the militarization of Georgia and has pulled it toward NATO. If anything, NATO needs this war more than Russia.

Dick Cheney might be one of the most reviled men in the U.S. media and one of the least credible in the world, but he can still set the tone for much of American press coverage of Georgia. "Russian aggression must not go unanswered," he thundered through his spokesperson. Then CNN depicted Mikheil Saakashvili as "a pro-Western ally of the U.S. ... intent on asserting [his] authority over South Ossetia and Abkhazia, both of which have strong Russian-backed separatist movements." Not an ally of George Bush, mind you, but of the West. When it comes to Russia, it is assumed that it is an anti-European and anti-American power.

To be sure, evidence of Saakashvili's militarism, violent thuggery, and authoritarianism is littered all over the news reports. But no one takes the time to show the man as the predator and provocateur the equal Slobodan Milosevic. Instead, the gloves are off against Russia because it just makes so much more sense to panic about the Russians rather than those poor Georgians who sent the third largest military contingent to fight George Bush's war in Iraq.

Thankfully, the Russians protected the defenseless ethnic minorities of South Ossetia and Abkhazia. Left to the E.U and U.S., a chapter of ethnic cleansing by Georgia on Europe's doorstep would have just been blanked out.$

Ajay Goyal wrote to us in response to this publication:

The attached article here was submitted to you on August 12 in response to am initiative and request from Mr. Pankin [Opinion Editor].

The fact that I made no preconditions or demands does not mean I expected or accept the mauling this article has been given by your editors.

I was mailed a scan of the Washington DC edition by a friend and was horrified to see that the edits introduced fundamentally changed my stance and opinion. The satirical opening was converted in a way that makes me look like an ill informed village bum. Did it not occur to your editors that I was trying to expose the ignorance of some British media! I had pointed that British papers were referring to a James Bond film to get people to focus on the conflict — idea being much of western media reporting was almost as shallow and fictional as Bond films. Instead it was changed in a manner that I appear to be suggesting that Georgia is where Bond film was set. Hello !! I have never seen such unprofessional and juvenile editing and it points to incompetence and perhaps worse in how this edition is being published. You should have sent the edited version to me for approval and I would certainly not have agreed to publishing the version you did. If you need editors I can think of 50 students in my son's high school who will do a better job than your current editor. Just let me know.

I was further surprised to find that the article was excluded from the UK edition completely. I believe you owe me, your publishers and readers an explanation as to what pressures you succumbed to in not publishing my opinion in London edition. And why you did not take a stand.

I would like you to publish the original version of my article on your web site without delay. Secondly, I demand that you publish a correction in your next edition in Washington DC and point the readers to the correct version on your web site.

I had proposed to collaboration between my newspaper The Russia Journal with Rossiskaya Gazeta in 2004 so I could use some of their resources and improve the depth of coverage of my publication. I had published The Russia Journal for four years in the US without any sponsorship or support from any government organization or agency. I am glad you are being paid by RG or Russian government to publish this edition. But what has been used of my 2000-2004 idea and proposal is the worst possible form of publication that can be produced from Russia that does far greater damage to the country and its image abroad than the worst Russo phobic media outlets. I agreed to write for it out of my respect for Alexei Pankin and you have let me and him down. I think there are times when personal financial interests and corrupt incompetent practices should be set aside in the interest of higher goals and conscientious work and this is one of those times. Your publication and its editorial quality are an embarrassment. Please publish the corrections and I shall have no further communication with you on this subject and leave it to Russian leadership to judge how its budgets are being misspent.
Ajay Goyal

Here you can see the original version of Ajay Goyal's opinion:
http://rbth.rg.ru/Ajay_Goyal.html