Medvedev: we're not afraid of another Cold War, but we don't want it 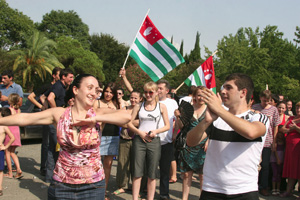 Russia's President signed decrees recognizing Georgia's breakaway regions of South Ossetia and Abkhazia as independent states. Both houses of Russia's parliament voted unanimously on a resolution asking the President to recognize the independence of Abkhazia and South Ossetia following requests from the leaders of both regions, which broke away from Georgia after bloody post-Soviet conflicts of the 1990s.

"I have signed decrees on the recognition of the independence of South Ossetia and Abkhazia by the Russian Federation," the President said later in a nationwide televised address.

"This was not an easy decision, but it was the only way to protect people's lives," Medvedev said, urging other countries to follow Russia's suit. "In violation of the UN Charter, its commitments under international agreements, and in defiance of common sense, the Georgian leadership began an armed conflict." Medvedev stressed that many civilians had lost their lives in the Georgian attack.

CNN
US and European leaders, including President Bush, have issued strongly worded statements urging you not to recognise the breakaway territories. Should your rejection of these warnings be interpreted as a direct challenge to the West?

- No, this is not a challenge, this is a well thought out decision. A whole number of circumstances made taking this step necessary. What are those circumstances?

For more than 17 years Russia has done its best to try to prevent this development and try to maintain the territorial integrity of Georgia. We did so at all levels and in all international forums. And even when Kosovo was proclaimed a subject of international law, we did not make a similar statement with regards to these two republics. But we were obliged to recognise their independence after people were killed. The first time bloodshed occurred was under President Gamsakhurdia at the beginning of the '90s and now, unfortunately, it happened again under President Saakashvili. And in doing so he dashed all the hopes that these three peoples: Georgians, Ossetians and the Abkhazians, could live together in one state. And for us to take this step was the only way we could prevent further bloodshed, prevent a further escalation of the conflict, and to prevent the deaths of thousands of innocent civilians.

The second reason is that every people has a right to self-determination. This is provided for in the provisions of the UN Charter, the relevant international conventions and the Helsinki Final Act. And if another state believes that a people has expressed its will to have an independent existence and conducts a referendum, which actually was the case in both of these two republics, any other state in the world has the right to recognise this independence, whether others like it or not.

BBC
When the West recognised Kosovo you were opposed and said it went against international law, and now you are doing exactly the same thing. Is this not hypocritical behaviour?

- This is absolutely normal behaviour. My colleagues said to me on many occasions that Kosovo is a special case, casus sui generis, as lawyers say. OK, if Kosovo is a special case, this is also a special case. In the case of Kosovo we did not see sufficient reason for recognising a new subject of international law, but in this case, in order to prevent the killing of people and a humanitarian catastrophe, in order for justice to triumph and for these peoples to realise their right to self-determination, we have recognised their independence. No two cases are alike in international law.

But this violates the agreement that you drew up with President Sarkozy. In accordance with that agreement, negotiations would be held to discuss the future status of these republics. By taking this decision are you not renouncing the agreement that was reached, and does this mean that you think this agreement no longer needs to be implemented?

- We are not renouncing the agreement. I think the agreement signed by Georgia, South Ossetia and Abkhazia, backed by a guaranteed mission carried out by France, Russia and the OSCE, offers the only possible way out of the situation that has arisen. The six principles in the Medvedev-Sarkozy agreement have played their part, including the sixth principle. But we said from the start, and I spoke of this personally with President Sarkozy, that discussions on ensuring security for South Ossetia and Abkhazia would include the question of their status. In this situation we have decided to recognise their independence, and this builds on the sixth principle that we agreed on.

What are your troops doing in Poti? Are their actions an attempt to block the port, and if, for example, American ships want to enter the port to deliver humanitarian supplies, will Russia try to prevent this?

- There is no blockade. Any ships can enter the port, American or any other, and deliver humanitarian supplies, or what the Americans call humanitarian supplies - they are delivering arms, of course. We will not prevent this. As for our troops, our peacekeepers, they are deployed in the zones established by the agreements of 1992 and 1994 and by decision of the Mixed Control Commission in 1999.

Russia Today
Is Russia prepared for the long and tough confrontation with leading world powers that the decision it made today may lead to? And, in general, isn't Russia afraid of another Cold War?

- We are not afraid of anything, the prospect of another Cold War included. Of course, we don't want that. In this situation, everything depends on the stand of our partners in the world community, our partners in the West. If they want to preserve good relations with Russia, they will understand the reason for making such a decision, and the situation will be calm. But if they choose a confrontational scenario, well, we've been through all kinds of situations, and we'll survive.

The presidential campaign is underway in the US. Both candidates have spoken more than once on Russia's actions in Georgia. Do you think this situation is being used as an instrument for the political struggle inside the US?

- Well, as far as I know, usually during the elections in the USA, voters are quite indifferent to what is happening abroad. But if one of the candidates managed to use this question, well, Godspeed to him.

Al Jazeera
We can look at what steps the West might take. In December, they could decide to accept Georgia and Ukraine into the Nato cooperation plan. How will you respond if Nato decides to take in Georgia?

- Ultimately, this is Nato's affair. We have tried to build a partnership with Nato. Nato has tried to re-examine this partnership of late. I said yesterday that if this is what they want, let them go ahead. We can say goodbye to each other. It will not be a tragedy. As I said, Nato has greater interest in this cooperation than the Russian Federation. If Nato does decide to open its membership plan to Georgia we will not be happy, of course, and this certainly would increase the tension.

As for Ukraine, it would be good to first of all ask the Ukrainians themselves what they want. Ukraine has not even held a referendum on the issue. On the missile defence issue, the decision to deploy a radar station and missiles on Polish and Czech territory, this is yet another step adding to the tension. We cannot see it as anything other than a step aimed against Russia, no matter what the motives advanced by the Nato member countries.

They say there are countries somewhere out there that represent a threat, but this is all a load of nonsense. These missiles are to be stationed alongside our border and they are a threat to us - that is certain.

This will, of course, create increased tension. We have to respond somehow to this situation, and naturally enough, we have to use a military response.

But I think that Nato is aware of this. This is their choice. We are not the ones deploying missiles.

There was a sharp drop on the stock market after your statement today. Are you worried about foreign investment pulling out of Russia? Don't you think Russia needs good relations with the West?

We live in a global economy. Events on the markets in New York hit Tokyo the next day and then make themselves felt in Moscow too. We are all interconnected.

I hope therefore that our American partners will concentrate less on sorting out international relations and more on strengthening their own economy because the American economy plays a key part in many economic problems, and the fact that important institutions such as Fannie May and Freddie Mac are ready to declare default is a situation that will have serious consequences for America and for other markets.

As for capital flight, military campaigns always have a negative effect on the markets, but the events on our stock market are more to do with the processes underway in international financial markets. I have studied the analyses and they show that the changes and the drop in value on our stock market arise primarily from the situation on the global economic market and the state of affairs in global finances.

Of course we will work on strengthening our own economy. We want foreign investment, and there can be no doubt about this. We cannot build a developed country on energy prices alone, but I think that all countries need to follow a responsible economic policy. I think this is a very important conclusion.

We all depend on each other.