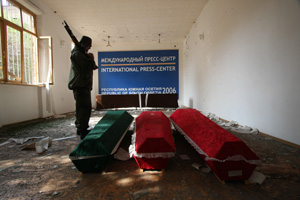 A deep breath fills the lungs, and straightens your insides, crumpled in the fist of war like the Cellophane wrapper of a cigarette pack. I breathe in the calm. The silence is only broken by mice stirring somewhere in the ceiling.

The rodents are busily moving things, rolling from place to place as if they know that several hours ago the Georgian President promised not to shell the Ossetian capital any more. If there is to be no shelling, you feel as if you can go back to your daily chores.

However, the rodents and I have only five more minutes to attend to our household chores. At 10.05pm the "mice" play comes to an end: Mikheil Saakashvili breaks his word. Rockets and shells rain on the city, shaking walls and windows. It is as if every blast chips away parts of the sky and hurls them against the window. Along with several other people, we rush to the basement of the house on Stalin Street (now probably destroyed) in the centre of Tskhinvali.

We are wearing what the raid caught us in - slippers, bathrobes, shorts... Many had already gone to bed when the Georgian shells started raining on the city, and all the agreements and promises flew away with the chunks of house foundations and twisted metal that used to be cars.

"Ma tars, ma tars..." (Ossetian: "Don't be afraid"), a mother calms her son, Batradz. The boy, aged about eight, has buried his head in his mother's lap.

At around 11pm the lights go out in the basement where we are hiding, as in the whole of Tskhinvali. The senses become sharper when it is pitch-dark. Like a blind man you distinguish the slightest shades of sounds, which immediately translate themselves into pictures before your mind's eye.

Up on the surface, the night sky is illuminated by the white flare of exploding shells, momentarily making it look like a huge photograph negative. Splinters whiz by like bumblebees. Bullets make a strange whistle as if somebody has shaped his lips to whistle but instead just breathes in. The gun of an armoured vehicle goes "ta-ta-ta... ta-ta-ta." "Ma tars, Batradz. Ma tars." The mother's words are drowned out by the deafening echo of a shell which blasts a neighbouring block of flats. It is as if somebody banged a heavy door close to your ear. Pieces of concrete fall from the basement ceiling...

But even the howitzers in nearby Ergneti and Nikozi do not sound as terrifying as the salvos of the Georgian Grad artillery rockets fired from much further away, in Gori. As the rockets near their targets, they emit a sound like a flame on gigantic arrows with burning tips. The Grads are fired at random so that the clouds of "arrows" fall on the roofs of Tskhinvali's peaceful houses. As the shelling goes on, people get ready to spend the night in the basement.

...It's 5am on August 8. The bombardment of the city is in its seventh hour. The battery in my phone is dead by 9am. It is already light in Tskhinvali. Remembering the great rule that "in war, he who runs survives", I leave the basement. I run along close to a wall, my head drawn into my shoulders. Bullets and fragments hit the road, raising little fountains of dust. In the city, Georgian commandos and Ossetian fighters are exchanging fire.

Insensible to fatigue, I'm running very fast and turn the corner. "Bang!" I fall on my stomach. Clouds of dust rise over the ground, approaching my feet. They are caused by a grenade that exploded five metres away. I get up and run, spitting out dust. Moving in my direction on the other side of the street are four Ossetian fighters. One of them reloads his automatic rifle as he runs. The oldest looks no more than 23. A few more steps and I dive into the entrance of a five-storey block of flats.

I see silhouettes of men in the doorway. Women and children are taking shelter in the basement. I hear muted weeping from below. I hear a woman's tired voice: "How long will the bombing last? Let us raise our hands and surrender before they have killed us all. It looks like Russia has forgotten us." Surrounded by old people, women and children you cannot help feeling guilty. A young man's place now is in the war, defending his people; he has no place among the elderly and the children.

There are about 20 people in the basement and hardly anyone dares to go up. Only an old man, Inal, a former peacekeeper who saw action in 1992, calmly strolls the street opposite the entrance while the shelling is still going on.

"F-- the war, exercise is the main thing," the veteran mumbles as two Ossetian policemen carry a fighter with arm and leg wounds towards the entrance.

"The Russians will come today, they'll help us," says Inal setting fire to a piece of dry spirit which he puts on a gas stove. "Georgian tanks are already in town, it'll be hard without the Russians," the former peacekeeper says, sipping the freshly made coffee.

The best I can do is to keep silent. However, our silence is broken by two Georgian SU-25 planes. One of them opens fire on the house where we are - just for kicks. Inal and I hasten to the basement.

Once again - damp darkness. There is a small hole where the pipes run through the wall. It faces south to where the Georgian commandos are advancing.

Putting your head in the hole is dangerous: bullets come through the hole and hit the concrete basement ceiling with a hollow sound.

I catch myself thinking that my whole short life, the efforts of my grandparents who brought me up, my universities and the books I have read - all this was but preparation for this moment when shells explode over my head. I instinctively draw my head into your shoulders and sweat streaks down my spine.

It looks as if death is nearby and it smells of dampness and I feel the dryness of my lips. Now when the planes make another dive to fire on us, and we know that they will fire on us as the roar of the engines approaches, we feel that it may be our last day.

This is not fear, but rather grief over what we might have said and done.

Suddenly the planes stop bombing and fly south towards Georgia. What's happening? Within seconds a deafening chorus of a thousand voices shouting "Hurray!" comes from the street.

A crowd is welcoming a column of Russian armoured vehicles that have entered Tskhinvali.

I run into the street, the roar of Russian armour is heard nearby. The Russian soldiers are driving the Georgian troops out of Tskhinvali. A man, his eyes bulging with horror, runs up to me. "Help me. What shall I do? I am Georgian, I worked here in Tskhinvali. I am a worker, where shall I go?" he shouts in broken Russian. "Run," I tell him, and again wonder at the wickedness of war in which innocent civilians are the first to suffer.

At 7pm, when the shooting and shell blasts subside and the bursts of machinegun fire are petering out, I leave a flaming Tskhinvali, engulfed in sorrow. The Russian troops have driven the Georgians out of the city, but this is not yet the end of the war. There are still civilians in the city. Tskhinvali is still in the grip of the dirty hands of war, a war unleashed without warning under the cover of night. A war whose victims were and always will be civilians.