Russia aims to ensure peace in a volatile region 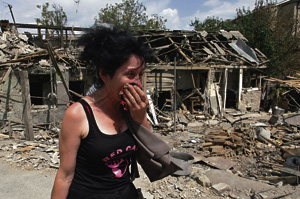 To launch an attack on Tskhinvali and expect Russia not to intervene militarily was a huge mistake for Georgia. This time, Russia's military replay was fully in line with Western standards.

Relations with Georgia have been a thorn in Russia's side for almost 20 years. In 2003, Russia failed to establish normal relations with President Mikheil Saakashvili. Tensions in relations with Tbilisi lowered Moscow's international prestige and enhanced the political status of Saakashvili, considered to be practically an American appointee.

The escalation of violence in South Ossetia in early August did not leave much room for optimism, but this time the opponents swapped public sympathy. It was Georgia that made unforgivable blunders, whereas Russia's conduct was clear and purposeful. What is most impressive is that Moscow seems to have learned the lessons the great powers (and other states) have taught it in the last decade.

First, the Kremlin and the Foreign Ministry realized that after the events in Yugoslavia, East Timor, and other hot spots, the world has come to tolerate the armed defense of national minorities being cruelly oppressed by the majority. The bombing of Serbia in 1999, no matter how awful, was still better than the inaction of peacekeepers at Srebrenitsa in 1995 or in Rwanda in 1993. It was a huge mistake for Georgia to launch an attack on Tskhinvali and expect Russia not to intervene militarily. Russia's military reply was fully in line with Western standards.

Second, for the first time, Moscow skillfully used not only the rhetoric but also the practice of humanitarian intervention. Russia has finally understood that it can use this Western doctrine, which has caused so much criticism and derision, to its benefit. President Dmitry Medvedev's words about forcing Georgia to accept peace sound very different from his predecessor's threats. This time, Russia has successfully carried out humanitarian intervention backed by references to the UN-issued peacekeeping mandate.

Third, Russia's response was in line with the doctrine of preemptive action. The West was indignant at strikes against Georgian military installations located far from the conflict area, but for the most part these were facilities that could have been used for attacking Russian troops.

This follows the example of Israel's strike against an Iraqi nuclear reactor in 1981, and the United States invasion of Iraq in 2003.

The conflict in South Ossetia has resulted in a serious political failure for the United States, no less conspicuous than for Mr. Saakashvili. For the first time, Russia has played Western style. Without violating the UN mandate issued for its peacekeepers, it has carefully fulfilled its mission and consistently emphasized its humanitarian character. Russia has reiterated its right to suppress an enemy's firing points if the enemy does not want to accept peace.

The United States should ponder the truth of its idea that democratic nations never act as aggressors. Surprisingly, Russia has learned many lessons that it seemed to have ignored. This is a promising sign.

There are no grounds to believe that now Medvedev will fall under the influence of nationalists, as some analysts have rushed to say. The use of force is justified when it is to prevent the harm of civilians, and in this situation shows that Medvedev's policy is fully supportable. -

Russia, Georgia, North Ossetia and South Ossetia signed an agreement to introduce peacekeepers into the zone of the Georgian-Ossetian conflict in Dagomys (a suburb of Sochi) on June 24, 1992. On July 14, the Joint Peacekeeping Force (JPF) began to arrive in the region.

The 1,500-strong JPF was made up of three 500-strong battalions from Georgia, Russia, and North Ossetia. Its joint headquarters included a group of 72 military observers, who performed their duties at 21 permanent and four temporary observation posts. Three of the posts were Russian-Georgian. The JPF's zone of responsibility included a section 56 miles long and 25 miles wide. The zone's total area was 670 square miles.

Without violating the UN mandate issued for its peacekeepers, Russia has carefully fulfilled its mission and consistently emphasized its humanitarian character.