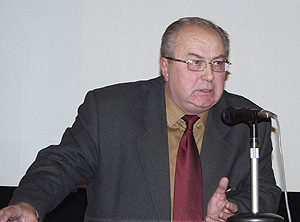 In the last thirty years of the 20th century, world energy consumption almost doubled, and it has now surged past 10 billion tons of oil equivalent (TOE), with organic (fossil and renewable) fuel accounting for 90% of global energy consumption.

Hydrocarbons are the main source of energy and will remain so for decades. But many experts believe oil production will reach its peak in 2020-2030, with natural gas following closely.
Given population growth and near identical per capita energy consumption across the first and second world, it will be impossible to balance supply and demand - even with the demand for energy at a minimum, and production at a maximum.
By 2050, oil and even gas output is unlikely to have outgrown current figures in a significant way. Even the most optimistic forecasts for the growth of other energy sources: coal (where tremendous resources raise equally tremendous problems) and renewable energy (now mainly biomass, water and wind energy), and a more energy-efficient global economy do not make up for the shortfall.
The energy deficit in the middle of the century will be equivalent to one-third of total consumption. This unsatisfied demand will be a constant source of growing international tensions, with no methods yet invented to deal with them. It seems likely that energy requirements will only grow. And that is but a step back towards a non-market redistribution of resources known since the time of pyramids.

Energy consumption pattern in the 21st century: a forecast
If the present trend continues, energy requirements and energy technologies in the current century will double compared with present levels.
The energy sector is no longer an arena in which different energy technologies battle for a "place in the sun". The scale of global energy development is so vast that all sources capable of contributing to a common pool find their users. The main thing is that both traditional and innovative energy technologies should develop side by side, especially the latter, which have a larger resource base.
No fossil resources can be sufficient to meet the demand entailed by the expected rate of growth. Among known technologies only nuclear fission and fusion (plus solar energy, which harnesses the power of natural fusion occurring in the sun) can provide the required resources.
Uranium resources, for example, estimated annually by the Organisation for Economic Cooperation and Development and the International Atomic Energy Agency, can satisfy global energy needs (50 billion tons a year) for at least 500 years (on condition that all uranium, not just the 235 isotope currently employed, is utilised). Solar power is in general the biggest energy resource available to the humankind. But among all these technologies only nuclear fission is a meaningful method of energy generation today.
By the end of 2007, the world had 439 nuclear power reactors in operation with a total net installed capacity of 371.7 GW (electrical). Currently, twelve countries are building 30 new nuclear units with a combined capacity of 24 GW (e).

New surge of interest in nuclear generation
This is yet a far cry from the nuclear boom of the 1960s, when 10 to 15 reactors were commissioned every year. But more than forty countries have already announced their intention to create a nuclear branch in their energy industry. Current plans under development in individual countries focus on a collective figure of 1,000 GW (e) by the middle of the century and are being continually revised.
Several years ago the OECD International Energy Agency, a leading world authority never suspected of nuclear lobbyism, predicted a decline of interest in nuclear generation. Now it is speaking of a "global energy revolution". Its necessary ingredients are: as yet little-known carbon sequestration (capture and storage of carbon dioxide), generally favoured renewable energy sources and energy-saving policies, and nuclear power, which has no general appeal. "We will have to build 32 new nuclear power plants every year," forecasts IEA director Nobuo Tanaka, with pinpoint accuracy.
If governments continue their present energy policies, the IEA says, by the middle of the century, greenhouse gas emissions will rise by 130%, and demand for oil, by 70%. Meanwhile there is consensus among the scientific community about climate change. A report to the UN says such change is real and it is caused by human activity. The effect of greenhouse gases on the planet is fraught with catastrophic risks.
The current scale of nuclear energy, which is emission-free, and its technological potential suggest that it is capable of rapid and sustainable development. If we assume that nuclear energy is to fill the gap between supply and unmet demand, then its installed capacity must reach several thousand gigawatts by the middle of the century - a staggering figure.

The Sky's the Limit
Forecasts for the world's energy requirements in the 21st century put no cap on the development of nuclear energy development, whose scope will ultimately depend on innovation within the industry. In particular, new reactors and production methods must be developed for tapping all mined uranium, making nuclear power "quasi-renewable". There is also a new and cardinal application for nuclear energy: as a source of high-potential heat for energy-intensive processes, and a new fuel - hydrogen.
The nuclear community does not view technological development as its only challenge. The nuclear industry must also live up to the safety standards demanded of it by the better-off part of humanity, which is frightened by its previous record.
Dozens of "new-look" countries without experience or expertise in this field will inevitably take up nuclear energy. Nuclear and physical safety, safe handling of radioactive waste, and nuclear non-proliferation must become the "linchpins" of a new nuclear era. This will call for broad international cooperation between countries with advanced nuclear programmes and newcomers seeking a "nuclear Renaissance", effectively a new international policy.
A great deal will depend on the coordinated efforts of the two founders of the "first nuclear era"- the United States and Russia. International projects initiated by these two countries early in this century - the IAEA International Project on Innovative Nuclear Reactors and Fuel Cycles (INPRO), Generation-IV, and later initiatives - are only the beginning of a "global energy revolution".
Despite its vast hydrocarbon resources, Russia has a strategic interest in speeding up the development of its nuclear energy industry to maintain nuclear security, preserve and utilise effectively its own resources, and expand the export of energy and high tech products.
That is a prospect Russia cannot ignore. It will have to accept nuclear energy as a basic necessity of life and ensure its swift advance in the future.