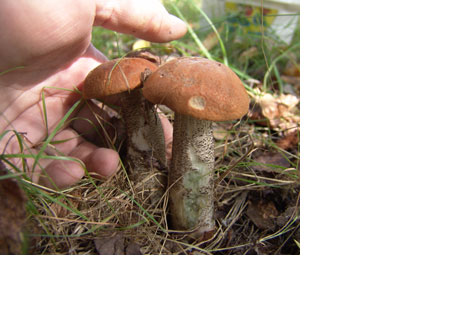 There are lots of different ways to relax in Russia, and I've already wrote about how Russians enjoy spending weekends at their dachas. When Russians escape to the countryside we might go fishing, hunting, play badminton and so on. But what really strikes foreigners is the Russian predilection for gathering mushrooms.

"What?! Gather mushrooms?" my British colleague exclaimed. "When I read about this in a Russian textbook I thought it was a kind of joke or some vestige of the Soviet Union." For Russian people, however, there is nothing strange about going to some woods and gathering mushrooms in the wild for eating. After a heavy rain, during mushroom season, whole families often venture into the nearest forest, picking bucketfuls of mushrooms, which are cooked and eaten for dinner upon return or, alternatively, dried or marinated for later consumption.

One of the most fascinating things about this activity is that even city residents know the most out-of-the-way paths in the forests, the special "mushroom places," and which mushrooms are edible and which could literally kill you. Yes, it is possible to buy fresh, marinated or dried mushrooms in the store, but the aim of mushroom pickers is the joy of harvesting your own delicacies. "This jar contains ones I picked two years ago near Tver," one mushroom hunter told me, turning the jar. "Look how pretty their stripes are and at the caps they have..."

Thousands of years ago, Egyptian Pharaohs declared mushrooms sacred and reserved them for their own, godly, use. The Romans called them "food for the gods." The tradition of collecting mushrooms used to exist in a number of countries, but today Russia is one of last. During the long history of gathering mushrooms Russians have acquired lots of different legends and superstitions. Russian peasants considered any welcome surplus of mushrooms to betoken a similarly welcome surplus of bread. If you see a mushroom in your sleep, then Russians say it is a sign of tears to come. Whenever there are more mushrooms than you can deal with, it is a sign of war. In 1940, there were lots and lots of mushrooms, and the next year World War II broke out.

Each true `mushroomer' has his own secrets and certain words "to attract" mushrooms. Approaching the forest, they often say "Mother-soil, excuse me! Trees and leaves, relieve me." Are you ready to adopt this little Russian tradition? If yes, here is some advice from an experienced mushroom hunter to help you.

First, think about your clothes. No t-shirts! Your body must be covered and your head covered with a hat in order to repel ticks. Put on good shoes, with your trouser-legs over them to protect from the creepy crawlies.

Second, bring a sharp knife. When you cut a mushroom, be very gentle - don't bother the mushroom spawn. Don't pick any mushrooms you don't recognize (it is often hard to distinguish between edible and poisonous species). Store collected mushrooms in a wicker basket. By the way, if you find an orange-cap boletus, look for one more - they grow in pairs. Whenever you find a toadstool, look more closely, as ceps should be nearby.

To find your way back, bring a compass with you, so that you won't get lost. Or orient yourself to the sun. There are also some natural reference points, such as the moss that grows on the northern side of trees.