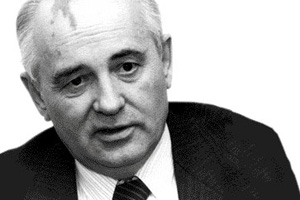 The Soviet Union's last president will be awarded for "his courageous role in ending the dangerous, decades-long Cold War and in giving hope and freedom to millions who lived behind the Iron Curtain," the statement said.

Gorbachev, already a Nobel Peace Prize winner, will be presented the Liberty Medal by former U.S. President George H.W. Bush, the chairman of the National Constitution Center, at the official ceremony on September 18.

The former Soviet leader was selected as the Liberty Medal laureate in June ahead of the 20th anniversary of the fall of the Berlin Wall in 2009. When the announcement was made, Bush called Gorbachev "a great world leader and dear friend."

This year's ceremony is likely to be marred by the deterioration of relations between the West and Russia over the recent conflict over Georgia's breakaway republics.

Gorbachev, respected in the U.S. and Europe for the reforms that led to the collapse of the Soviet Union, has blamed Georgia for provoking hostilities in its breakaway region of South Ossetia and criticized Western states for backing Tbilisi.

"Western television didn't show what happened in Tskhinvali," Gorbachev said on CNN's "Larry King Live". "Only now they're beginning to show some pictures of the destruction. So this looks to me like it was a well-prepared project. They wanted to put the blame on Russia."

The president of the National Constitution Center, Joseph Torsella, said that "awarding the Liberty Medal should not be construed as an endorsement by the center of President Gorbachev's views on the Russia-Georgia conflict."