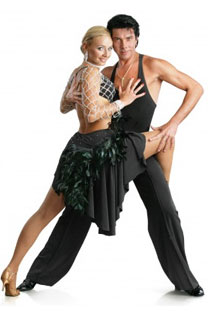 Couples from 14 countries travelled to Glasgow in Scotland for the competition - now it its second year. Each pair was made up of a professional dancer and a national celebrity. The couples had two minutes to strut their stuff before the judges and an TV audience of millions.

Russia was represented by dancer Alexander Litvinenko and the 2006 Olympic figure skating champion, Tatyana Navka. Their programme was a fusion of Cha-Cha, Samba, Rumba, Paso Doble and traditional Russian dance. And it earned 121 points from the European viewers.

The Russians finished 33 point behind the Polish pair, Marcin Mroczek and Edyta Herbus, and two ahead of Ukrainians Serhij Kostetskiy and Liliya Podkopaeva.