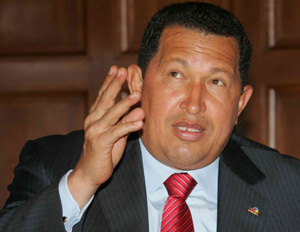 Venezuelan President Hugo Chavez has announced the timeframe for the upcoming Russian-Venezuelan naval exercise, arranged in line with Russia's plans to extend its presence in international waters.

According to earlier media reports, Venezuelan navy officials said four Russian warships and a number of Venezuelan missile frigates, patrol boats, submarines and aircraft would take part in the joint drills on November 10-14.

The president dismissed criticism of the joint exercise with Russia by comparing it with the Southern Cross naval war games involving the Dutch, French and Brazilian navies, which are scheduled for November 2-14.

"Russia is a strategic partner of Venezuela and we will do everything possible ... to ensure the success of the upcoming exercise," Chavez said.

Chavez, an outspoken critic of Washington since coming to power nine years ago, has focused his foreign policy on bolstering ties with countries outside the U.S. sphere of influence.