Sarkozy in Moscow to mediate peace in the Caucasus 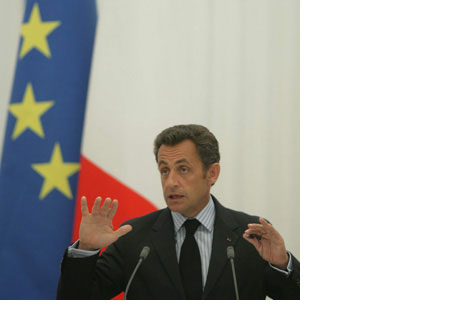 Sarkozy will be accompanied by the President of the European Commission, Jose Manuel Barroso, and the EU's top diplomat, Javier Solana, to meet Russian President Dmitry Medvedev.

Last week Medvedev and Sarkozy had a telephone conversation in which the leaders discussed the agenda of the upcoming meeting. During the conversation the presidents also exchanged views on the results of the EU summit, which was held in Brussels on September 1. The Russian side noted the "constructive role of France, which is presiding over the EU, in adopting a generally balanced position."

Russia then expressed regret that the document adopted at the summit "did not contain principal assessments of Georgia's aggressive actions as the original cause of the crisis around South Ossetia and Abkhazia."

Sources in the Elysee Palace have said that, at the Moscow meeting, France wants guarantees from Russia over the withdrawal of the remaining Russian troops in Georgia, under the fifth clause of the Medvedev-Sarkozy peace plan.

"The major goal is to try to set concrete dates, reach agreements, which guarantee the complete withdrawal of Russian forces, which are remaining in Georgia," French sources said, adding that Russian troops in South Ossetia and Abkhazia are not under discussion.

Sarkozy also intends to agree on a date and a venue to launch international discussions to ensure security and stability in Abkhazia and South Ossetia under the sixth clause of the settlement plan.

Also up for debate is the possible deployment of an enlarged mission of OSCE civil observers in the conflict area, EU foreign policy Chief Javier Solana told reporters on Saturday.

Currently 20 European observers are staying in the Georgia-South Ossetia conflict area. The OSCE is planning to increase sharply their number to about 200 people. Solana noted that new observers could only go to the region with the permission of the Russian authorities.

Georgians pray for future in the wake of war

Hundreds of Georgian orthodox believers came to church at the main avenue of Tbilisi on Sunday to light candles and pray for their future in uncertain times.

Exactly one month after the conflict started, Georgians are still struggling to come to terms with their new reality and question the future security of their country.

Meanwhile, President Sarkozy and the EU delegation will head to the Georgian capital Tbilisi after their visit to Moscow.