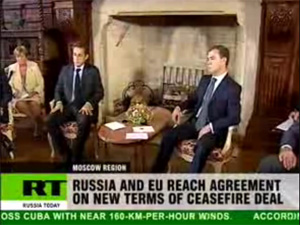 The French President came with a letter from Georgian president Mikhail Saakashvili, promising that Tbilisi would refrain from using force against Abkhazia and South Ossetia in accordance with the six-point plan adopted on August 12.

After the talks the leaders held a media briefing where Dmitry Medvedev announced the additions to the August 12 ceasefire.

He said: "all Russian peacekeeping forces from five observation checkpoints located in a territory between Poti and Senaki would be withdrawn over seven days at most with account taken of the fact that legally-binding documents with guarantees of not using force against Abkhazia and South Ossetia were signed on September 8, 2008.

"Russian troops should be completely withdrawn from zones located outside South Ossetia and Abkhazia to pre-conflict positions within a period of ten days upon the deployment of international peacekeepers, including at least 200 EU monitors, not later that October 1, 2008.

"All Georgian troops should return to their pre-conflict positions by October 1, 2008."

He said the UN and OSCE international observers will continue their mandates in Georgia in the same areas the occupied before August 7, 2008, with the possibility of future adjustment by either the UN Security Council or the OSCE permanent Council.

"The deployment of additional observers, including at least 200 monitors from the European Union, should be stepped up in buffer areas outside South Ossetia and Abkhazia in numbers sufficient to replace the Russian peacekeepers by October 1, 2008.

"The European Union which guarantees the non-use of force should actively prepare the deployment of an observer mission in addition to the already existing monitoring mechanisms.

"International discussions provided by point 6 of the Medvedev-Sarkozy plan of August 12, 2008 will begin in Geneva on October 15, 2008. Preliminary discussions will start in September 2008.

"These discussions will be devoted to the ways of safeguarding security and stability in the region, the problem of refugees and displaced persons to be solved on the basis of internationally recognised principles and in accordance with the practice of post-conflict settlement, and also to other issues if they are submitted with mutual agreement by all sides."

"The process of recognition has begun and will accelerate," he said. "At which stage the EU countries will join this process, will depend on their position."

Medvedev emphasised once again that it was the only possible way for Russia to preserve human lives and to ensure the survival of the Ossetian and Abkhazian peoples.

Medvedev insisted that Russia is strictly implementing the six-point plan. And Georgia, despite its vocal commitments to peace, continues to build up its military strength, according to the Russian President.

"The Georgian side is trying to rebuild its military potential and is being actively helped to do so by some of our partners, particularly the United States," Medvedev said.

The Russian President remarked that the EU's position is "fairly reasonable and compromising".

Nevertheless, he said he believes European leaders have failed to grasp that the crisis in the region was caused by Georgian aggression.

Nicolas Sarkozy in his turn reiterated that the EU condemns Russia's decision to unilaterally recognise South Ossetia and Abkhazia as independent countries. Sarkozy says the EU still considers them a part of Georgia.

President Medvedev also said a Russia-EU summit will be held in October in Nice.

Asked what the prospects were for a new Russia-EU partnership agreement, Medvedev said it was up to Russia's European partners.

"We don't want to see a decline in relations. But a disaster will not happen even if it takes us longer to negotiate on this agreement than we initially planned," he said.

At an emergency EU summit earlier this month, EU leaders decided to delay talks with Russia on a new agreement about strategic co-operation in protest at Moscow's actions in Georgia.

After the talks in Moscow, Nicolas Sarkozy and the EU delegation left for Tbilisi for talks with the Georgian leadership.

Watchthis story on video or here: