Russia says its Navy ready to thwart any threat to security 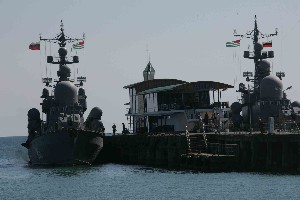 Russia's Navy remains a strong force capable of repelling any attack by a potential aggressor, a Navy spokesman said on Tuesday.

"The Navy remains a serious deterrent prepared to thwart any threat to Russia's national security, and if necessary provide an adequate response to any act of aggression," Capt. 1st Rank Igor Dygalo said.

Russia announced on Tuesday it will send a naval task group, comprising nuclear-powered missile cruiser Pyotr Velikiy (Peter the Great) and support ships, for a sortie in the Atlantic Ocean, and to participate in joint naval drills with the Venezuelan navy in November. (Russian Pacific Fleet exercise - Image gallery)

Washington immediately responded by mocking the Russian move, which is widely considered a response to NATO's increased naval presence in the Black Sea following a brief military conflict between Russia and Georgia over South Ossetia. (Russian Navy modernized - Image gallery)

U.S. State Department spokesman Sean McCormack jokingly said that if Russia really intended to send ships to the Caribbean, "then they found a few ships that can make it that far."

Commenting on this statement, Dygalo said: "Do not forget that the Russian Navy has nuclear submarines and surface ships capable of conducting training and combat missions anywhere in the world."

For instance, the Pyotr Velikiy is a Kirov (Orlan) class nuclear-powered guided missile heavy cruiser, which has a practically unlimited operational range and carries 20 SS-N-19 Shipwreck surface-to-surface missiles with either nuclear or high-explosive warheads and about 500 surface-to-air missiles of different types, supplemented by a large number of other weaponry.

"The return of the Russian Navy to global oceans is an accomplished fact, whether you accept it or not," the official said.

Russia announced last year that its Navy had resumed, and would build up, its constant presence in different regions of the world's oceans.

A naval task force from Russia's Northern Fleet, consisting of the Admiral Kuznetsov aircraft carrier, the Udaloy-Class destroyers Admiral Levchenko and Admiral Chabanenko, as well as auxiliary vessels, conducted from December 2007 to February 2008 a two-month tour of duty in the Mediterranean Sea and North Atlantic.

The Navy spokesman stressed that Russia has no intention of 'brandishing a stick' and threatening other nations.

"The main goal of the Russian Navy is to ensure the national security of the country; those who attempt to find any secret agenda in the upcoming joint naval exercises between Russia and Venezuela are mistaken," Dygalo said.

"During the drills, ships and naval aircraft will practice coordinated maneuvering, search-and-rescue, and communications," he said, adding that cooperation between foreign navies is normal international practice.

The collapse of the Soviet Union led to a severe decline in the Russian Navy, but the recent rearmament program until 2015 put, for the first time in Soviet and Russian history, the development of the navy on an equal footing with strategic nuclear forces.

Out of 4.9 trillion rubles ($192.16 billion) allocated for military rearmament, 25% will go into building new ships.

Russia's Navy commander, Adm. Vladimir Vysotsky, said in July that the Navy command had decided to form in the future five or six aircraft carrier task forces to be deployed with the Northern and Pacific fleets.

At present, Russia has only one operational aircraft carrier, the Nikolai Kuznetsov, which was commissioned in the early 1990s and has recently re-entered service after a prolonged overhaul.