Russia could target missiles at sites in Central Europe 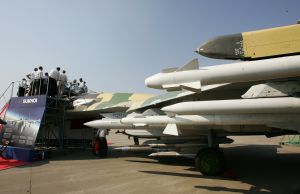 Russia's Strategic Missile Forces could target some of their intercontinental ballistic missiles at U.S. missile defense facilities in Poland and the Czech Republic, the forces' commander said on Wednesday.

Col. Gen. Nikolai Solovtsov said Russia's leaders are concerned by the lack of transparency in the planning of the U.S. missile defense system rather than the actual deployment of the missiles in Poland and radar in the Czech Republic.

"Therefore, we have to take appropriate action," he said. "I cannot rule out that should the country's military-political leadership make such a decision, some of our ICBMs could be targeted at missile defense sites in Poland and the Czech Republic, and subsequently at other such facilities."

He said the Strategic Missile Forces already had superior missiles that are capable of successfully penetrating the U.S. missile defense system that will not be in place until 2015-2020.

The commander said Russia will have a total of 50 silo-based Topol-M (SS-X-27) ICBMs by the end of the current year, while the number of mobile-launched Topol-Ms will increase to 15.

The missile, with a range of about 7,000 miles (11,000 km), is said to be impervious to any current and future U.S. defense systems. It is capable of making evasive maneuvers to avoid a kill using terminal phase interceptors, and carries targeting countermeasure systems and decoys.

It is also shielded against radiation, electromagnetic pulses, nuclear blasts, and is designed to survive a hit from any form of laser technology.

Col. Gen. Solovtsov earlier said that Topol-M systems would be equipped with multiple independently targetable reentry vehicles (MIRV) in the next two or three years.

Russia says its Navy ready to thwart any threat to security