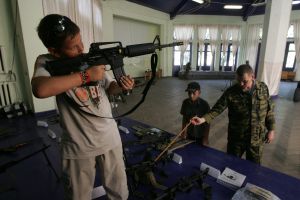 After presenting the draft on Tuesday, Russian UN Ambassador Vitaly Churkin said: "the unrestrained militarization of Georgia in recent years, backed by the United States and certain other countries, certainly contributed to the act of aggression committed by [Georgian President Mikheil] Saakashvili against South Ossetia."

Earlier in the day, the Pentagon announced it would send a team to Georgia to decide what military support should be provided.

"Georgia, like any sovereign country, should have the ability to defend itself and to deter renewed aggression," Undersecretary of Defense Eric Edelman told a Senate committee.

Churkin acknowledged that the Russian draft was bound to be blocked, "considering the well-known position of the United States in the Security Council," but said that proposing it was a "necessary political step."

The text says that all states must take "necessary measures to prevent the direct or indirect supply, sale or transfer of arms and military equipment" to Georgia, as well as "any aid, consultations linked with military activity."

The Russian envoy said the issue of Georgia's demilitarization could be raised at international talks to be held in Geneva on October 15 on Abkhazia and South Ossetia, which are now both recognized by Russia as independent countries.

The meeting's agenda will also include "security and stability in the region," and the "return of refugees and displaced people in line with the principles of international law," Churkin said.

The negotiations were included in a six-point peace plan signed by Dmitry Medvedev and French President Nicolas Sarkozy during last month's conflict between Russia and Georgia.

Russian Foreign Minister Sergei Lavrov said on Tuesday that Russia insists Abkhazia and South Ossetia must be invited to the Geneva talks on their status, while Georgia has ruled this out.

Also on Tuesday, Russia formally established diplomatic relations with South Ossetia and Abkhazia, and Russian Defense Minister Anatoly Serdyukov announced that 3,800 service personnel would be sent to each republic to defend against potential attacks from Georgia.

Russia recognized the republics as independent on August 26, two weeks after it had concluded a military operation in response to an attack by Georgian forces on August 8 on breakaway South Ossetia.