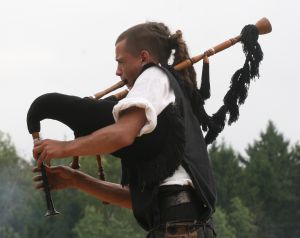 The British government has slapped a ban on its army bagpipers from travelling to Russia's capital this autumn, for the Kremlin Zorya. British performers were pulled from the event, in which 47 military bands took part last year, in protest at Russia's intervention in Georgia.

The move has been condemned by both the former head of the Edinburgh Military Tattoo, Brigadier Melville Jameson, and Vitaly Mironov, director of the Kremlin Zorya Foundation, the organising charity.

They accuse British Foreign Secretary David Miliband of playing politics, and wasting months of preparation for a non-political event.

"I've always thought music crosses all boundaries and in my business - of producing tattoos - we've always had acts from all over the world - regardless of their political persuasions," said Brigadier Jameson.

Jameson had to cancel his trip to Moscow, along with many other tartan-clad Scots that were expected to descend on the capital this week.

Ordinary people in the street find it hard to see a rationale behind this decision. They feel politics should never affect cultural ties.

Mikhail Lermontov, a Russian who believes he has a Scottish officer among his ancestors, is heartbroken that the festival plans had to be been shelved.

"Our cultural traditions and values don't depend on political decisions! They won't be able to change them no matter what they do. I went to last year's event - it was such a show - and we absolutely loved it - and those emotions are something you can't take from the people," he said.

The Kremlin Zorya, a non-governmental organisation, was founded with the help of the organisers of the Edinburgh Military.

Until the Foreign Office decision, it was a shining example of culture overcoming politics, and of the firm cultural links between Scotland and Russia.

Now good relations between Scots and Russians are up to London, and other important cultural links between the nations are also in jeopardy.