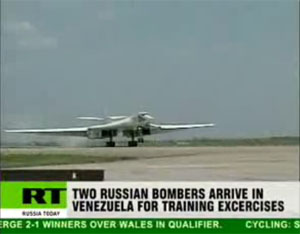 The Tu-160 Blackjack is a supersonic, variable-geometry heavy bomber, designed to strike strategic targets with nuclear and conventional weapons deep in continental theatres of operation.

The bombers will conduct a number of training flights over neutral waters in the next few days and later return to their home base in Russia, the ministry said in a statement.

The planes landed at Venezuela's Libertador airfield and during the flight to the South American country were accompanied by NATO fighters.

"The flight itinerary extended over neutral waters in the Arctic and Atlantic oceans. The Russian bombers were accompanied by NATO fighters," the statement said.

Russia earlier announced it would send a naval task force from the Northern Fleet on a tour of duty in the Atlantic Ocean and participate in joint naval drills with the Venezuelan navy in November.

Venezuelan President Hugo Chavez said on September 1 that Venezuela welcomed the Russian Navy and Air Force on its territory.

"If the Russian Navy arrives in the Caribbean or the Atlantic it may certainly visit Venezuela, we have no problems with that and would warmly welcome it," Chavez said.

"And if Russian long-range bombers should need to land in Venezuela we would not object to that either. We will also welcome them," he said.