The Other Caucasus War 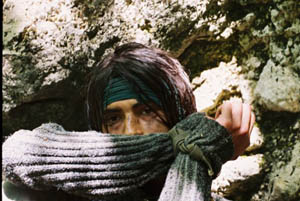 It's been at least a decade — from the 1996 release of Sergei Bodrov's "Prisoner of the Caucasus" — since Russian filmmakers tackled the Chechen conflicts with any degree of sensitivity. True, in between there have been any number of overtly patriotic and nationalistic action films, which used the locations for their own purposes, without really examining the emotional impacts of the war.

So it's welcome to see one of the best directors of the last 20 years, Alexei Uchitel, tackling the subject — not as a war film, but as a human drama. His new film, "Captive" (Plenny), has been rewarded with international festival acclaim. Like Bodrov's "Prisoner," it succeeds by virtue of its elliptical, understated take on the conflict itself, and by centering on three characters — two Russian soldiers and their Chechen captive — and how their interaction develops.

The opening sees a Russian army convoy attacked and pinned down in the mountains of Chechnya. Only two soldiers, sniper Rubakha (Vyacheslav Grekunov) and his friend Vovka (Pyotr Logachev), escape and return to their base. Along the way they capture a Chechen rebel, Djamal (played by the Georgian actor Irakly Mtskhalaya).

The script, by Timofei Dekin and acclaimed Russian novelist Vladimir Makanin (based on the latter's short story), doesn't spare any punches — the commanding officers are corrupt, selling arms to their local opponents. To prevent Djamal's exchange as a hostage and to lead the two Russians to try to rescue their comrades, Rubakha and Vovka take the Chechen across the mountains on a route march. Their communication is slow and intermittent, but contacts develop, which are put under serious stress in the film's denouement. They need him along the way as much as he hopes for their protection, because to shoot him would be only too easy.

The elephant in the room in Uchitel's film is the homoerotic contact between Rubakha and Djamal that is only hinted at, mainly through the fact that actor Mtskhalaya is very attractive, and has the element of eye contact with his captors that suggests much more than is ever spoken.

That is where the divergence from Makanin's story really shows, given that the original prose work was open about the sexual attraction between the two. Interviewed in the summer, the writer seemed content with the adaptation, even if it had patently lost what might be seen as the central element of the story. It can only be guessed that a faithful adaptation of the original source material, with the Chechen war element thrown in, might not have received public funding in Russia.

But it leaves "Captive" in some way without an emotional core. There's military action and a long trek, with emotional elements seen — very reservedly — on the side. Commendable though it is for its honesty about the corruption of the Russian army, it also explores little depth about the Chechen side of the war.

Running at 80 minutes, the sense of rhythm doesn't lose pace, and visual elements look strong, if understated. "Captive" is not Uchitel's best film — but it's no mean achievement. And a good thing that it's been made at all.