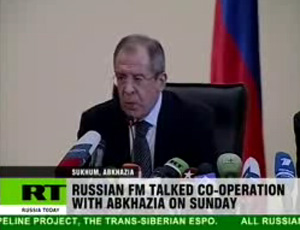 On Sunday Lavrov travelled to Sukhum, capital the other newly recognised state, Abkhazia.

Lavrov discussed candidates for Russian and Abkhaz ambassadors in the two countries with president Sergei Bagapsh, as well as the prospective location of the Russian embassy in Sukhum. The new ambassadors are to be named in the near future.

Lavrov pledged Russia's commitment to developing Abkhazia, and securing recognition of its independence by other countries. Besides Russia, Nicaragua is the only country to fully recognise the republic's independence. Belarus and Venezuela have indicated they may recognise it in the near future.

"Russia guarantees there will be no more war in Abkhazia. That will be done with the help of the treaty of amity, cooperation and mutual assistance, which will be signed at the summit level in the near future," Lavrov stated at a joint press-conference with Sergei Bagapsh.