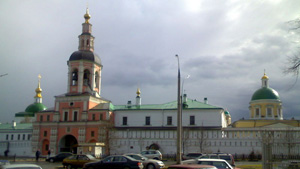 The bells of St. Danilov Monastery will once again toll in their original Moscow home after an 80-year exile in Harvard. Church officials say Russia has only three sets of bells of similar caliber, and only Rostov can boast a larger ensemble.
The 17 bells arrived Wednesday in Moscow, while Harvard campus - hard-pressed to part with the chimes that several generations of students had grown accustomed to - will be reimbursed with exact copies.

The bells began their journey on August 10 from the port of New York. Arriving earlier this week in St. Petersburg, they were sounded Sunday at the city's St. Isaac Cathedral. One bell had already made the journey to Moscow last year.

Destined for scrap metal in 1930, they were miraculously rescued by Charles Richard Crane, an American businessman with an interest in all things Russian. On the behest of Harvard president Thomas Wittemore, he purchased the 18 bells from the Soviet government and took them to Massachusetts, where they have adorned Harvard University's Lowell House, a dormitory for undergraduates.

"Monks have been trying to get the bells since the 1980s," Deacon Roman, one of the curators of the project to return the bells to the monastery, told Rossiiskaya Gazeta. "Harvard had gotten a request but replied that it would be too difficult to take them down from the tower. Also, the university administration said the bells had become an important part of the campus and that the students had grown to love them. The biggest bell weighs 12 tons and they were worried that the bronze casting could be harmed during shipment."

While reluctant to part with the bells, Harvard was honored to see them returned to the St. Danilov Monastery, one of the cradles of Russian Orthodoxy, and glad to welcome a replica from Voronezh.

"It is a great honor to receive this exquisite new bell... on the eve of the School's centennial anniversary," a Harvard press release quoted Professor John Quelch, Senior Associate Dean and Faculty Chair for Centennial Planning, as saying.

"Atop the iconic Baker Library, it will become part of the tradition and life of the School for hundreds of years to come. Its Russian heritage reminds us of the global nature of this institution, with students, faculty, staff, and alumni coming from around the world. We are grateful to the members of the St. Danilov Monastery and all the craftspeople who have helped make this day possible."

The monastery is celebrating the 25th anniversary since its restoration after years of neglect during the Soviet Union. It was founded at the end of the 13th century by Daniel of Moscow, the son of Alexander Nevsky. The bells, considered to be among four of the best ensembles to survive, were cast in the 18th and 19th centuries.

A ceremony to consecrate the bells is being held Friday at St. Danilov's.