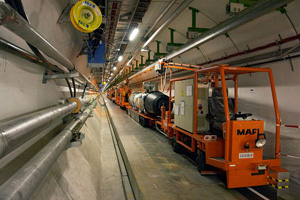 The development of the Large Hadron Collider (LHC), the world's largest and most powerful particle accelerator, has involved over 700 Russian physicists from 12 research institutes, a project coordinator said Monday.

The $5.8 billion international project, which will be officially unveiled on October 21 at the European Organization for Nuclear Research, known by its French initials CERN, has involved more than 2,000 physicists from hundreds of universities and laboratories in 34 countries since 1984.

"The project involved a total of 700 people [physicists from Russia] from 12 institutes," said Viktor Savrin, deputy director of the Research Institute of Nuclear Physics at Moscow State University.

Back in 2000, then CERN director Roger Cashmore said "we would not have been able to create the LHC without them [the Russians]."

Savrin said the project had given a substantial boost to 30 manufacturers which were also involved. The navy's Baltic Fleet even provided unused brass.

"Russia received orders totaling $120 million from CERN to build the detectors and the accelerator," the researcher said.

According to Savrin, Russia also provided around 5% of funding for detectors and some 3% of all spending on the accelerator.

The accelerator complex, 27 kilometers in circumference, sits in a subterranean tunnel about one hundred meters below the Franco-Swiss border, near Geneva, Switzerland.

"I do not think it is realistic to build a larger accelerator on a similar scheme, nobody is likely to venture to do that," Savrin said.

Some theorists and members of the general public have long voiced fears that microscopic black holes may appear as a result of the launch of the LHC, capturing surrounding matter and ultimately leading to the destruction of the entire planet.

However, scientists have consistently dismissed these allegations as "ridiculous."
"Obviously, the world will not end when the LHC switches on," Lyn Evans, the head of the project at CERN, said in June.